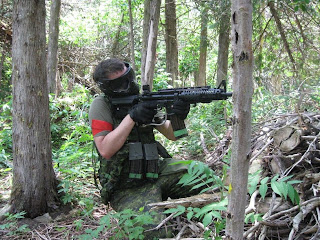 May 29th, 2010, the first Relay-For-Life paintball tournament was held at JT’s Frontline Paintball in West Ottawa. About 50 people got together for fun and charity, with a portion of the admission fee and paintball sales going towards cancer research.

The organizers and volunteers on-hand made everyone feel welcome, and made sure everyone had a great time. 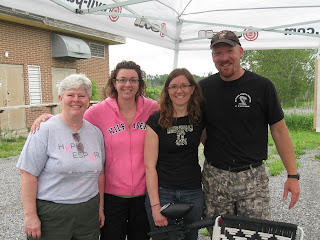 They’d put in a lot of work preparing for the event, and got a lot of sponsors on-board. 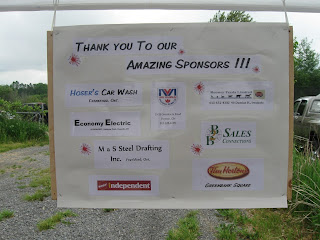 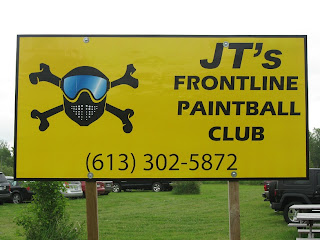 JT’s Frontline Paintball hosted the event, and was perfectly suited to the small, fast-paced games that were held. JT's is one of the more Milsim-oriented fields in the Ottawa area, providing Tippmann Bravo One M4-style markers to renters (the Canadian version of the US Army Alpha Black). Renters also get an old-style olive green Canadian Forces combat shirt to wear over their clothes, in place of the usual bland coveralls that most fields give out.

It’s a fairly small field, with only 4 functioning playing areas: 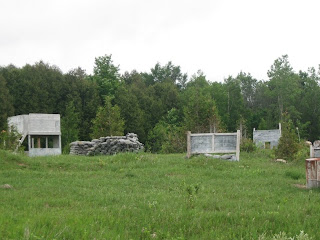 The ridge is the largest playing area. It’s a large, open field littered with wooden bunkers, sandbag fortifications, and props like barrels and a car. 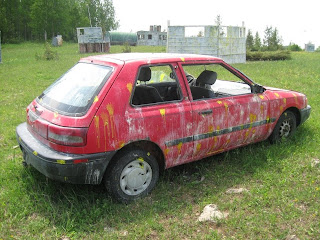 One side of the field slopes upward to a plateau with a 2-storey tower at the center. At the far end of the flat side is a command trailer.

The woods borders the ridge, and the two fields can be combined for larger scenarios. It’s a woodsball field that’s had most of the underbrush cleared. Large trees and wooden bunkers provide plenty of cover. 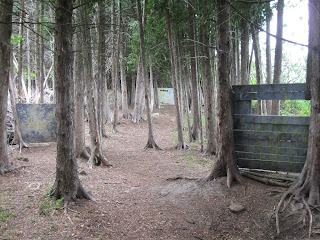 The jungle is an extremely thick wooded area with small trees and lots of undergrowth. It’s very easy to sneak around, and ambushes are common. 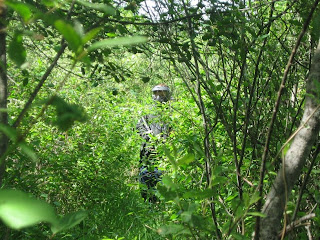 The trenches are part of a sideways-H shaped trench network. There are also observation/sniper towers at each end of the trench system. There’s a canal for water run-off, but if it’s rained in the past few days it’ll probably be too drenched to play in. On the day we were there, the trenches were too muddy to play in. 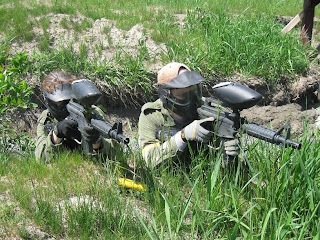 The staff members were very friendly, helpful, and put a high priority on safety. They ran great games, with a variety of fun scenarios. Paint prices were reasonable, and were even cheaper for members. At the moment, JT’s is offering a special: $50 for a one-year membership, which is an outstanding deal considering that most of the fields in the Ottawa area charge $150-200 a year for a membership.

Every year in the fall, JT’s hosts a Humans vs. Zombies game, one of the biggest games in the Ottawa area. The game begins in the late afternoon, and continues well into the night. The game features fireworks and smoke machines, and is not to be missed if you live in Eastern Ontario.

A big thanks to JT’s Frontline Paintball for hosting this event!

In total, $2350 was collected for cancer research and the Relay-For-Life campaign. 3 people won paintball markers (a BT Delta, Tiberius T8, and Tippmann Project Salvo), and many others won door prizes like free paintballs, paintball jerseys, and paintball gloves. And of course, everyone won out by having a great time! I hope to see you all there next year if the event is held again.