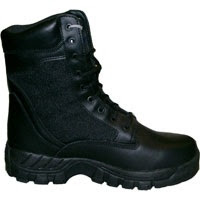 Footwear for paintball doesn’t have to be complicated. Basically, any shoe or boot meant for hiking or the outdoors will work well in a paintball game, and depending on how well-kept your field is, you might even be able to get away with cross-training shoes or cleats. But as a Milsim player, not only do you want capable footwear, you want something that completes your “tacticool” look as well.

These days the “holy grail” of footwear for Milsim paintball and Airsoft players is the Oakley SI Assault Boot. But as I mentioned in my recent review, the $200 price tag on them puts them out of reach for practical paintball players who aren’t made of money. If you’re not willing to pay the cost of a brand new marker for something you put on your feet every couple of weeks on the field, you’ll have to look around for something less costly.


Why surplus is a bad idea

Cheap army issue boots from surplus stores are okay, as long as you don’t mind heavy military boots (that have been worn a few times by a sweaty recruit). But it’s telling that professional soldiers in the Canadian Forces (and other standing armies) often ditch their issued footwear after basic and invest in Danners, Oakley SIs, or some other high-priced boot. The issue stuff can really be murder on the feet, and tends to sacrifice comfort for durability. On the other hand, jungle or desert boots from a surplus store can be nice and light, and may seem like a good buy. But with only nylon and soft leather going up your ankle, they provide very little ankle support. You owe it to yourself to play in relative comfort and safety, so I’d avoid these flimsy boots.

So with that said, just what DO I recommend for the player just looking for a decent boot?

Nowadays there are lots of "tactical" footwear options out there that would be suitable for most paintball players. Tactical footwear is designed for police, security guards, SWAT, paramedics, and other service professions that need to stay light on their feet. These professionals tend to require fairly rugged footwear to get the job done, but not as rugged as a boot made for a soldier who has to stand guard all night in a wet, muddy trench. Although paintball players do occasionally need to walk through deep mud, or climb a rocky hill, this is not typical of your usual paintball field. For light to medium play 30-40 times a year, and an occasional big game, tactical footwear is the answer.

But tactical footwear can be expensive, with even the cheapest models retailing in the $150-$200 range. Luckily I know of a decent tactical boot that offers good support, light weight, good looks, and durability at only 60 BUCKS!!! 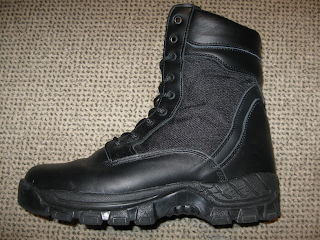 Enter this gem of a tactical boot: The 8-inch tactical boot from Viper Police Footwear (also sometimes sold under the Uncle Sam brand name). They’re standard issue for front-line members of these organizations that I know of (and probably a lot more that I don’t):

There’s a reason they’ve been selected by these organizations. Aside from the low price, they’re light, relatively solid, and grip well. They have 1200 Denier Nylon around the sides for flexibility, comfort, and breathability, but have 2 layers of hard leather wrapping up the back to provide good support around the ankle. 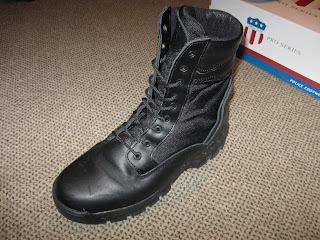 On the left is a nearly-new pair (worn around town to break them in), and on the right is a pair that’s seen 1 season of paintball use. Notice how the pair on the right is still in amazing condition: 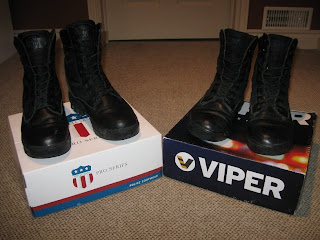 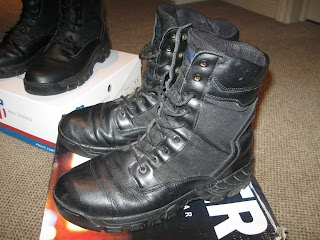 I have to admit that I did put a bit of polish on the old pair for these photos, because they were pretty dirty after paintballing in them for a year. But you’ll notice that there’s no structural damage at all on them - no threads coming loose, no glued parts coming undone, and no tears in the nylon. 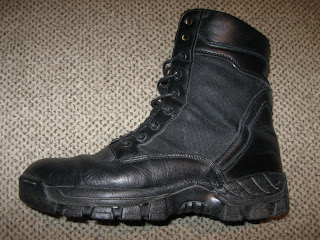 Even the sole has held up well and is barely worn, even though I do a lot of running and aggressive pushes during paintball games: 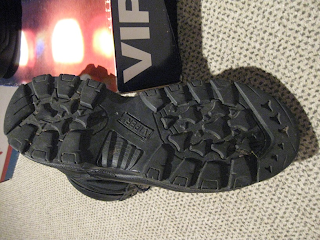 They breathe well, and can be worn in mid-summer without your feet getting too hot. They’re only slightly heavier than the Oakley SI Assault boots, and have as good a grip. They tend to be a little harder-soled than the Oakleys though, but they still have somewhat of a running-shoe feel. AND they’re less than a third of the price.

So where do I get some of these babies, you ask? At Gordon Contract, a store in Toronto that sells to emergency services personnel, and supplies equipment through contract to the City of Toronto and other municipalities. If you happen to be in the Toronto area, you can swing by and pick up a pair in person at their storefront location. Otherwise, you can order a pair from their Web Site HERE. Of course by ordering from the site you’ll incur shipping charges, but they aren’t expensive.

If you prefer something lower, a 6-inch version of the boot is also available for even less ($55), HERE. I personally hate 6-inch tactical boots, because at my height the rim of the boot tends to dig into my Achilles tendon when I drive. If 6-inch boots don’t bother you then go for it, but it’s something to keep in mind if you wear your paintballing footwear driving to and from the field.

So just because we play military simulation paintball doesn’t mean we have to simulate the heavy boots and foot discomfort that a lot of serving soldiers have to go through. For a smart choice in tactical footwear to keep you light and quick in harsh terrain, while still looking the part, consider the Vipers!
Email Post
Labels: Airsoft Canada Cordura Footwear Law Enforcement Military Milsim Oakley Paintball Review