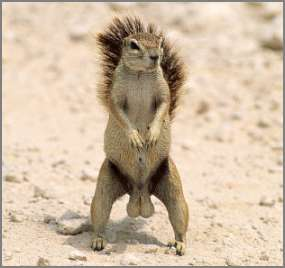 "Protecting the boyz" is a serious consideration for anyone getting into the sport of paintball. By this I don't mean watching your teammates's backs, or providing cover fire during a game (although this is important too). What I mean is protecting your chance to have future boys (and girls) by padding your "boyz" against brutal paintball hits.

When I first played paintball years ago, I didn't give any thought to groin protection. After all, what were the odds of getting hit in that exact spot? I figured being behind cover all the time, I'd mainly be hit while running, with my moving thighs protecting my nuts from side shots. And being a first-time player, I wouldn't be running head-on towards an opponent in any bonzai charges either. I figured it was no big deal, and if by some slim chance I did get hit in the breadbasket by a paintball, I'd just walk it off like any other hit and carry on playing. Well, you can see where this is going! In the final game of the night, I got shot right in the tip of the johnson at point blank range, and I screamed like a little girl in front of all the other players watching and laughing from the observation deck of the indoor field! It was so painful that until I got to the bathroom to check, I thought the impact had split the skin. Luckily, everything was in place and functioning as it should've, but I never played paintball again without taking steps to pad that area.

Now I realize this might be a difficult topic to discuss among rough and tough Milsim players. But let's all be secure in our manhood for the next 5 minutes, and take a quick look at the options for saving our privates! 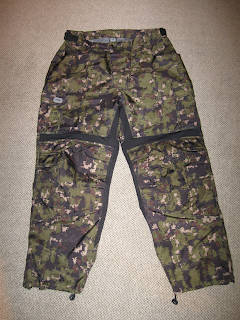 Speedball players have been benefitting from tournament pants with padding in the crotch for a long time now. Thankfully, in the past few years some paintball companies have realized the need to provide the same luxury to Milsim and woodsball players, and have been bringing some padded camouflage pants to the market. The protection they provide isn't fantastic, but it beats going into a game unprotected.

BT Paintball makes some pants that offer some decent protection, specifically the BT Combat Pants (retailing at around $100) and the BT Pro Pants (around $150). A company called PCS paintball (which doesn't exist anymore and was bought up by BT/Kee), used to make a fantastic padded woodsball pant called the PCS Retribution 07 pant (shown in the photo above). As the name implies, these were released in 2007, and are still available as discontinued items if you look hard around the Internet & eBay, and local paintball stores. I lucked out and picked my "jungle digital" ones up for $29.99 at a local paintball shop last year (ACU is also available). But if you don't like the BT pants and can't find the PCS ones, Special Ops Paintball is also a possibility. The pants in their Fusion 7 line feature a padded crotch and knee padding, and they look pretty cool too. One has to wonder about their newer Fusion X line though, which features pants that'll have you looking like you have a Muppet popping out of your waistband. I'm all for decent padding on the crotch, but not at the expense of looking ridiculous on the field: 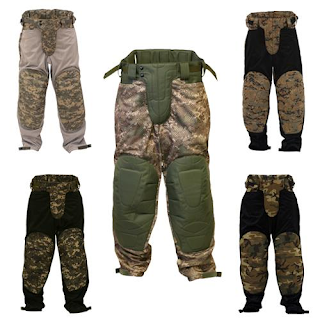 Anyway, paintball-specific pants are all fine and good if you're okay with a speedball type of pant in camo. However Milsim players, who wear authentic BDUs or replicas that are thin, with no built-in crotch padding, need something to wear underneath. Here are some options for the Milsim crowd: 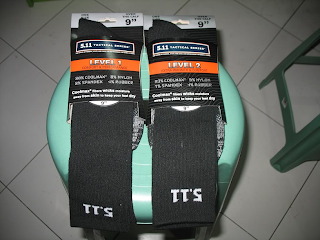 The Sock Method, sadly used for years by insecure men to make their packages look bigger, happens to work okay for paintball. Being too cheap to buy a cup, I actually used this method for a few games after that fateful day above, stuffing my underwear with a folded pair of socks. A problem I found with this method is that the waistband of your underwear usually doesn't hold the socks in place too well, and they can shift around as you run and crouch. This can lead to a lot of grabbing of your crotch to rearrange everything, which then leads to a lot of weird looks from fellow players.

Plastic groin cups have been used in countless sports for years to protect athletes. These are made for standing sports, where athletes stay on their feet. But for Milsim paintball, the edges of the cup can be a painful problem when you go prone or dive for cover. Not only that, but the straps that hold the cup in place can chafe, and take a while to get used to. They also tend not to fit you very well if you have a fat ass or muscular lower body, and you'll find yourself adjusting the straps constantly.

Soft groin cups are also available, usually made from foam with an outer leather or vinyl shell. They still suffer from the drawback of the straps, and if you use a leather version, can be tough to keep clean and smell-free. Generally though these are adequate for paintball play, because you only need to take the sting out of a flying gelatin ball, not a hockey puck. If you choose this option, try to go for a vinyl or neoprene version for easier cleaning. 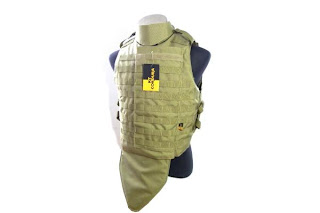 A military-style groin protector/apron is also an option for protection down there. Although the real ones are made of Kevlar, airsoft shops will sometimes sell Interceptor-style replica vests with foam versions attached, or sell the apron itself as an add-on to whatever vest you already use.

However, just because something is "milsim" doesn't mean it's practical to play in. Soldiers tolerate the discomfort of wearing helmets to avoid having their heads blown off, which I feel is a decent trade-off. Likewise, they wear Kevlar groin protectors/aprons that flap around when they run to prevent having their nuts blown off, which most guys would agree is also a decent trade-off. But when you're playing paintball with these items it's a different story altogether. A helmet, even if you like the Milsim look, is a pain in the ass to wear, makes your head a bigger target when you pop out of your bunker, and makes taking off your paintball mask a hassle. And those foam groin aprons that hang off your MOLLE vest and bounce around are likewise an unnecessary pain in the ass. If you happen to like the look of these things, and don't mind a long & wide foam panel flapping around and tapping you on the crotch when you walk or run, then consider this an option. Otherwise, choose one of the other solutions out there. 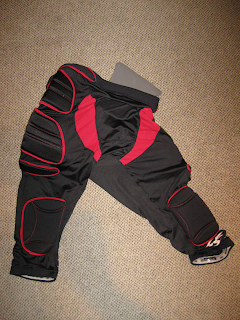 Paintball slide shorts are a Speedball item that some woodsball and Milsim players use for groin protection. They're essentially baseball slide shorts, with the usual side padding on the hips to avoid slide burn, but with the added protection of some foam padding over the groin area. Generally these work really well for any type of paintball, and I can't argue with anyone who wants to use these for groin protection. There are some downsides to keep in mind if you go with this option however.

First, the foam on the sides is pretty useless, because in the woods, with all the rocks, tree roots, and other hazards, you probably won't be sliding on your hip into a bunker. Also, the extra hip width from the padding may be a problem when fitting into your BDU pants. It can also interfere with a thigh holster/rig setup. Another issue is that there's only one thin flimsy foam panel between your nuts and a paintball flying at 300fps, and although the panel will take the sting out of the hit, you'll still feel a bit of the impact. For the price range you pay for most paintball slide shorts ($55-$75), you should expect more, and shouldn't have to supplement with added foam.

Under Armour sells a compression short in their Heat Gear line, and it has a pouch around the crotch for athletes to insert a groin cup or foam padding. 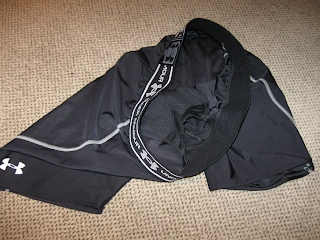 This option is what I've been using this season, and I highly recommend it! There's a slight bit of arts & crafts work involved in getting this setup up and running, but it's worth it. There are a lot of good reasons for going with these. First, this underwear is EXTREMELY comfortable for any type of athletic activity, or even day-to-day wear (they feel like going "commando"!). They also handle the heat really well. So, although these briefs cost about $40 CDN, you'll have an item that you can use not only on the paintball field, but anywhere else. They're cheaper than slide shorts, and are available in more of a variety of sizes for a better fit. The fact that the shorts are form-fitting means that the foam you insert will stay where it's supposed to, with no annoying straps, and won't slide around and leave you vulnerable.

Here's a how-to on turning these compression shorts into bonafide groin protection for paintball:

First, buy the shorts. SportChek carries them, and every couple of months they hold a Friends & Family Sale event on a weekday, where everything in the store is 25% off.

Next, go to Dollarama and pick up a foam yoga mat for $2. 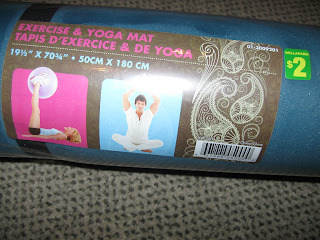 Cut out some foam panels in the same shape as the cup pocket on the compression shorts, and insert them into the pocket. I first used 3 layers in the pocket, but found it to be a little bulky. 2 layers seem to do the job just fine. 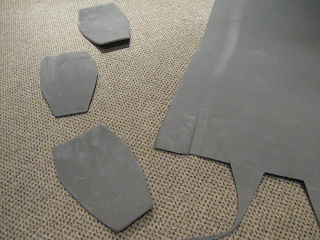 Alternatively, you could buy 2 computer mouse pads at Dollarama for the same price and cut out 2 neoprene panels from them for protection instead. In either case, this would be the finished result: 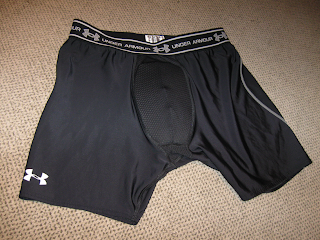 Cleaning this creation is pretty simple. Both the shorts and the foam panels can be washed in the washing machine on the Delicates setting, and left to air dry.

So this is the method that I find works best for me, but I've certainly given you plenty of ideas to try on your own. What you ultimately end up playing with will depend on your body type, and of course what you find to be most comfortable to play in. If you have any other solutions on how to protect your family jewels while paintballing, let us know in the comments section below!
Email Post
Labels: How To Milsim Paintball Safety