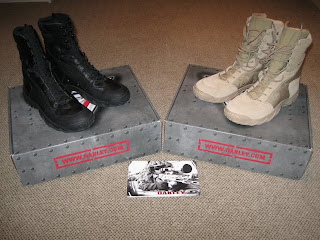 Thanks to the Oakley Forces Program, I was able to pick up some 8" Oakley SI Assault Boots recently at a great price. I got a black pair for business, and a desert pair for pleasure (and by pleasure, of course I mean Milsim paintball). Both are nearly identical except for colour and the materials used, and throughout this review I'll be focusing on the black version.

Note that these are the 8" edition, and that there's also a 6" edition available. There's very little price difference between the two ($10 or less), so buy whichever version you prefer. I personally go for 8" boots whenever I can, first for the extra ankle support, and second because I find the top rim of 6" boots tends to dig into the achilles tendon on my right ankle when I drive. This should be a consideration if you're like me and wear your boots driving to the paintball field and back.

Just a quick point of trivia: These are the boots worn by Christian Bale in the recent film "Terminator Salvation" (it's good to know that not only is this a badass boot, but it can be handy for stomping a T-600 in the face).

The boots come in a grey box, with a large logo on top that reads "Elite Special Forces Standard Issue". It's a bit odd that they'd be labeled this way, as the actual "Elite" edition of the boots hasn't hit the market yet, and will retail around the $500 mark when it does.

Another noteworthy detail on the box is that the boots are made in China, which is a departure from earlier versions of the Oakley boots, which were American-made. 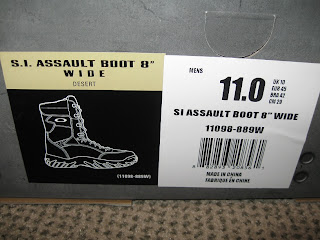 There a a few Internet reviews to be found saying that they're not as durable as they used to be, and this is probably due to this switch to Chinese manufacturing. A lot of the complaints come from professionals serving in Iraq and Afghanistan however, and needless to say these guys subject their footwear to a lot of abuse. If you're only playing paintball in them 30-40 times a year, you could potentially make them last for several years.

The boots' construction is solid at first glance. They're made using Cordura Nylon, soft leather, and a man-made material around the toe for extra reinforcement. 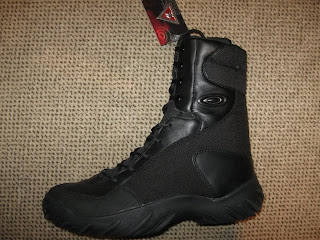 The other sides of the boots have 2 draining holes on them, to avoid having your boot stay filled up with water after you wade across a creek. 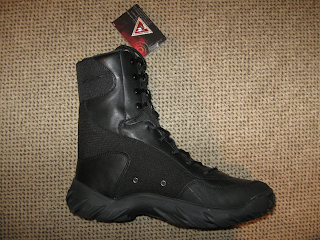 There's a lot of padding inside the boot, but remarkably it doesn't get too warm when worn for a long time. 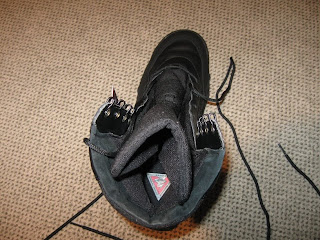 User complaints recounted how the old version of these boots used to have problems with squeaking on wet floors. However, the latest version has a simplified sole that doesn't have the squeaking problems. I've walked on a ceramic floor in these boots while the soles were wet, and not a squeak was heard! The new sole is pretty boring to look at, and doesn't have the aggressive pattern of the older one. Not that anyone will be admiring the soles of your boots, but it was probably a change made to address the squeaking issue. 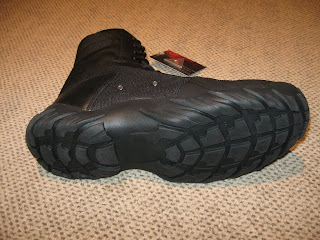 Despite their pedestrian appearance, the treads seem to grip well. Keep in mind though that I haven't done anything challenging with them in wet weather yet.

There are metal loops near the top of the boot for "speed-lacing", which is odd because the industry is moving away from metal on footwear these days. Metal eyelets are being replaced by plastic ones, and steel-reinforced toes are increasingly being replaced by composite ones. All this to say that if you work some sort of secure job that has you crossing through a metal detector to report to work, this feature might become a daily nuisance for you. 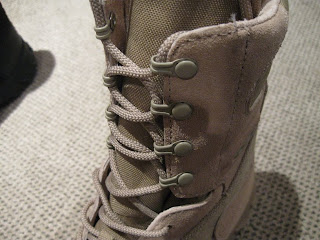 Another consideration for duty wear is that although the toe is made of leather, the cap is made from a man-made material that doesn't polish very well. This is something to keep in mind if you're a member of the Canadian Forces or some other job function where it's required that your boots be kept shined. 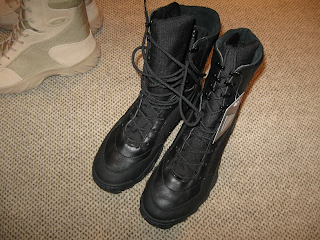 Adding to the cool factor are the laces that Oakley includes with the boots. The tips have the Oakley "O" logo on them. 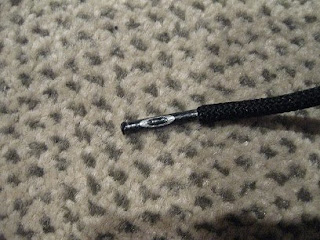 Unfortunately, you probably won't be using the included laces, as they measure in at 96 inches long! A 72-inch lace is a much better fit for this boot with its 9 pairs of eyelets, and leaves a lot less extra to tuck in or wrap around after tying.

Okay so enough about the details already! By now I'm sure you want to know what they're like to wear.

Well, my first impression when putting these boots on was "WOW!!!" They slide onto the foot easily, without having to pull out the top laces to put them on (which is typical of most 8" boots). The boots feel broken in as soon as you put them on, and I haven't seen that in any other pair of combat boots or tactical footwear I've had to wear. Usually I've had to endure at least a few days of arch pain and the occasional blister to start feeling comfortable in this class of boot, but not with the Oakleys!

The boots eliminate a lot of the bulk seen with other footwear in this class. Other boots like the Hi-Tec Magnum Stealth and certain 5.11 Tactical models look "fat" on your foot, with a lot of excess padding and size. The Oakleys on the other hand fit like running shoes with a very high top, and conform very well to your feet and ankles. You don't feel like you have moon boots on! And if you wear your pant legs over your boots, either on the paintball field or as a uniform requirement, you won't find your pant cuffs riding up the boots, the way they do with the bulkier boot models out there. 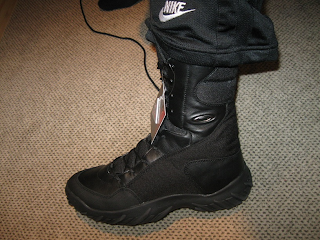 Speaking of running shoes, the Oakley SI Assault Boots are a pleasure to wear, and are VERY light. They're only slightly heavier than a cross-training shoe, and are a blast to run in. The soles are soft enough that you don't pound your feet when you sprint either. They literally feel like sneakers on your feet.

So my final word on the Oakley SI Assault Boots is that these are great boots, that I would recommend to anyone who needs footwear for duty use, working in harsh terrain, or for standing on your feet for long periods.

However, for Milsim paintball use, these boots are priced beyond what's reasonable. Oakley charges the general public around $200 CDN for a pair of the 8" ones, which is overkill for going out for a few hours on the weekend and laying down paint. If you're lucky enough to have a paintball buddy who's a reservist or full-time member in the Canadian Forces, you can get him to order them for you through the Oakley Forces Program for a lot cheaper ($80 CDN for the Wide version, and $133 for the Regular). If you happen to know someone with CSIS, police, CBSA, or another government agency that's part of the program, then you'd be in luck too (to see a full list of who's eligible, click here). But for those without an "in", 200 bucks is a hell of a lot to shell out for paintballing footwear!

For those looking for a somewhat lower price point while still wanting quality, I'd recommend the Converse Tactical line of boots, which can be had for about half the price (about $100-$120 CDN depending on where you buy them). 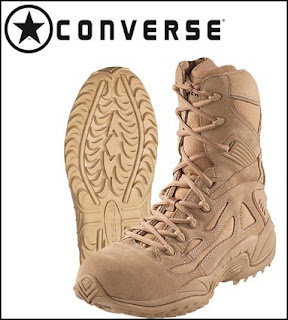 Although I've never had the chance to try them on, Converse Tactical boots have garnered some very positive user reviews, with some comparing them to the Oakleys in terms of comfort and quality.