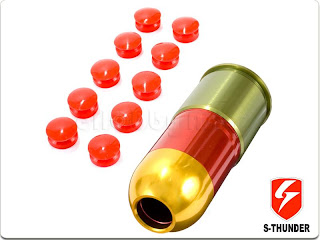 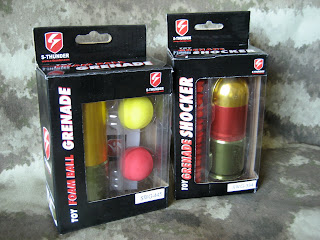 Options: Three different colour options, long and short barrels, standard and CO2 cores.
Specs:
Pros: The intimidation factor of these things is great. When I tried it out at the local field, one of the owner's immediately jumped in with, "What the hell is that?!". Operation itself is pretty easy, and you can use any source of CO2 to fill the shells (as long as you can put the S-Thunder fill adapter on it, and the grenades have the CO2 core installed). The report is amazingly loud if the grenade is filled properly! One of the times I tried the foam launcher out in my garage I thought I was going to go deaf! I really like being able to use CO2 for these grenades, as I can't think of any paintballer that would go out of his/her way to use top or green gas for their equipment.

Edit (June 7th 2010) - The CO2 adaptor provides a good amount of CO2 flow, and is really easy to use. It takes standard ASA threading, so if you desired you could probably even used it for an emergency marker air source back-up.

Cons: I'm not sure if it was the fault of the 12 grams I was using (copperhead, crosman and beeman) or the 12 gram air source adapter from S-Thunder, but I couldn't fill the grenades with any kind of consistency using the combination of the two. Because of this inconsistency, the initial field trials conducted by me and Mike where a bit underwhelming. I did have much better success using an 88 gram CO2 cartridge and the S-Thunder fill adapter, and I'm assuming you'd see the same good results from a constant air CO2 tank. Edit (July 7th 2010) - Turns out I was sent a pre-production model of the air source adaptor, and the staff of S-Thunder were right on it, and sent me the actual model. Check out the pro section for more details. The Foam Grenade wasn't able to fit into my Madbull launcher, but that was more of a compatibility issue than anything (I could fit it in if I backed out the set screws and removed the trigger mechanism temporarily). 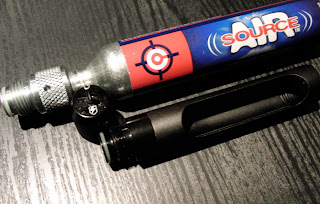 Try to use an 88g cartridge as opposed to a 12 gram adapter for better results.


Overall: Between the ability to use a variety of projectiles and CO2 as a propellant, S-Thunder's 40mm grenades are a great choice for paintballers wanting to use some heavy ordnance. That being said, I think that using the S-Thunder 12 gram adapter is a poor choice, as you won't get consistent (and thus, useful) results. The 12 gram adapter provides great CO2 flow, and with a regulator, makes for a consistent shot. S-Thunder now has a Canadian distributor, and you can check them out here.
Up next on the S-Thunder review chopping block is the Water Spraying Landmine.

Addendum (June 7th 2010) - It turns out I was sent a pre-production model of the CO2 powerlet adaptor for the original review. S-Thunder was quick to help me out and supplied me with the production model in a timely fashion. As a result I'll be redoing the video portion of the review, and the con section of the review took a significant hit.
Email Post
Labels: Airsoft Milsim Paintball Review