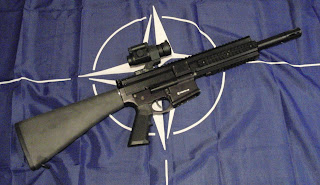 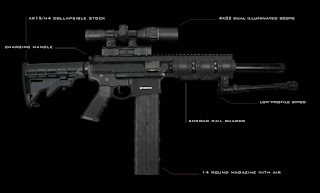 Note: I won't comment on any of the hopper-fed specifics of the T4, as I haven't tried it, and frankly never will.
Pros: This is about as close as you can get to an AR-15 in paintball marker format without treading into replica territory. One of the few markers that can fire First Strike rounds out of the box. It looks and feels amazing on and off the field, and nothing prepared me for how awesome it is shooting First Strikes from the T4. There's a real stigma around the word "sniper" in paintball, but I think it's safe to say this is the first true "sniper marker". The ability to use real AR-15 parts on the T4 opens up a myriad of possibilities, and provides an added layer of authenticity to the marker. The T4 breaks open like a real AR-15, and is easy to maintain. The barrel uses an interesting locking system that allows for quick barrel cleaning/changes while avoiding a screw-in system, and the barrel tip threads accept any Lapco/Tiberious threaded tip. 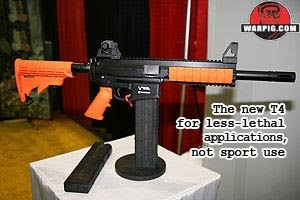 One of the first pictures of the T4, from a previous Shot Show.
Cons: The stock 14 round magazine is just disgusting. I don't know who took it into their head to mar such a beautiful marker with a hideous feed system. There are new 10 round magazines available, which have been the subject of griping from the online community, as they are rather expensive. Different magazine springs are required for the use of either First Strikes or regular paintballs, and using the wrong spring will give you less than favourable results. When I installed the A2 style stock, I had to spend about 4 hours with a dremel and a considerable amount of sandpaper, as the female stock tube threading on the lower receiver doesn't appear to be quite mil-spec. I know of only one other person to try a similar modification, and they ran into the same problem. It's a thousand dollars. 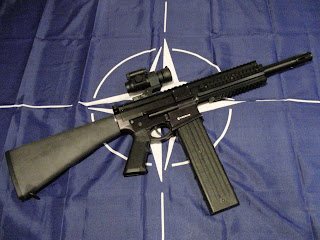 Sigh.
Overall: The only big thing holding back the T4 is the stupidly designed magazine, other than that the marker is one of the best milsim markers to date. It performs like a T8/T9 (i.e. very well), and is a great platform for the use of First Strike rounds. Hoppers aren't really my cup of tea, and the hopper compatibility for the T4 is a bit superfluous in my opinion. A large part of the T4's appeal for me is the lack of macrolines and bulbous hoppers, and I think the addition of those would ruin the look for me. I suppose the big question is, "Is it worth dropping a grand for?" For me, it isn't, which is why I waited till an opportunity came along wherein I paid a lot less for it.
Email Post
Labels: Milsim Paintball Review Sniper T4 Tiberius