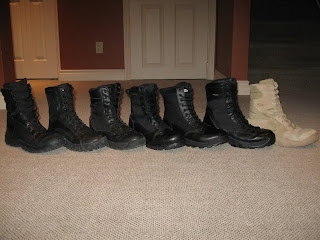 As a keen Milsim paintball player, you've no doubt invested a lot of money in a top-of-the-line Milsim marker, as well as all sorts of "tacticool" accessories to make it appear even more realistic. You've probably also sunk some decent coin into an air tank with a remote line to power that marker, as well as a tactical vest and pouches to hold it. And that's not even getting into the cost of a good mask! All told you've probably spent hundreds of dollars on paintball gear to accomplish the task of getting your paintball out of the gun and on target. But how much have you invested in your footwear?

You see, successfully lobbing a paintball at an opposing player is only half of the game. The other half is moving into position to be able to make that shot. In paintball, you have to move if you want to win! Moving to win in Woodsball means being light and quick on your feet, while being able to safely negotiate hazards like mud, rocks, and sloping ground. And while vegetation can often be your ally, concealing you and providing cover, it can also literally "trip you up", in the form of tree stumps, fallen branches, and slippery vegetation.

While soccer cleats or golf shoes are appropriate footwear for Speedball, to meet your needs on a Woodsball or Milsim field you'll need more. Cleats can be great in mud or slippery ground, but running into a structure or trying to climb a wooden staircase in a village setting while wearing them is just asking to slip and get hurt! Also, their low-cut form factor leaves your ankles without support, and leaves your ankle bones and shins open to impact injuries. No doubt about it, what you need to play all-out in a Woodsball environment are military-style tactical boots.

During Grey Ops' Boot Week, we'll be showcasing some tactical footwear that fits the bill for Woodsball, while maintaining that Milsim look you strive for. Over the course of several posts, we'll be outlining what makes a good boot for Woodsball play. We'll also be offering tips on how to care for those boots to make them last, and how to maximize their comfort. And of course, what would Boot Week be without some REVIEWS? We'll be reviewing some high-end tactical boots, and some low-end (but excellent value) ones. By the end of the series you'll have a good idea of what to look for in your next footwear purchase. You'll know what to expect for your money, and how to select proper footwear for an edge on the field, while maximizing safety and comfort for your feet and ankles.

As a primer for Boot Week, check out this video from Soldier Systems. In it, you'll see exactly what goes into designing and evaluating a boot for use by the military.