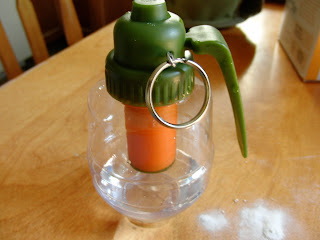 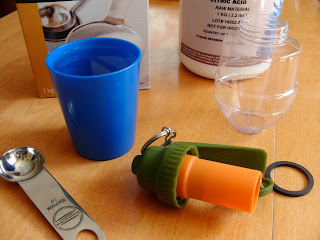 Price: Currently on sale for $40 USD in a complete package right here.


Pros: The grenades are very easy to assemble and use, and the ingredients are completely innocuous. I completely underestimated the volume of the grenade, and the first blast made my ears ring (the Sly Profit's padded ears helped out nicely for the second test, but it was still freaking loud, in a good way). There was no damage to anything around the grenade, including the thin cardboard box next to the grenade during the second test. The price is fair, and the package currently on sale is a great deal. The pouch included in the package is of a nice quality. 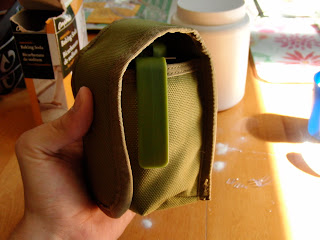 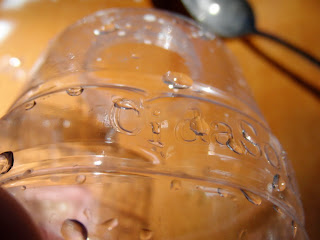 The dent that was the culprit of the failed detonation.
Cons: As can be seen by my blooper above, you can easily shatter the thin plastic shell if you throw it too hard, so the grenade either needs to be tossed softly or in an underhand rolling fashion. The "explosion" can leave a bit of a sticky spot on the ground, but nothing that a rinse can't fix.

Overall: The Cidasoft grenades are a good alternative to 12 gram sound grenades. I didn't test out the grenades with bbs as I wanted to focus on the paintball applications, and as far as those went I think these fill their role perfectly. However, until biodegradable bottles are released (in the works) I would only use these in a CQB environment. If you're on the fence about it, there are some very affordable small packages on Cidasoft's website that you can expand later with more shells or detonators. 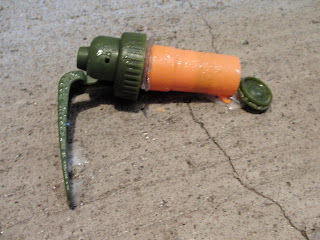