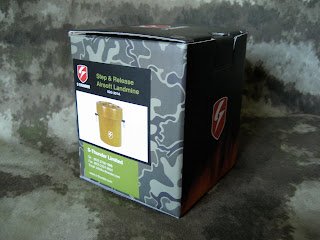 No music in these vids, I've got to figure out something to do about music licensing (Youtube is chastising me for using songs from various record labels).
Specs:
As far as pros and cons go, it has the same points as the Dual Use Landmine from S-Thunder with a few minor additions:
On an interesting note, it looks like Mike from TechPB will be doing some S-Thunder reviews soon! I'm looking forward to it, as its always cool to get the outside-in perspective on milsim products from that side of our paintball community. You can check out a preview for his vids here:

Finally, Yu-Hon from S-Thunder was kind enough to answer a few questions for me:

How did the creation of S-Thunder come about?


Like many businesses, our hobby became a business.  S-Thunder's management team were recreational milsim players, much like a typical weekend tag football players.  After playing for awhile, we started to modify our own gear to enhance its performance and accuracy.  Eventually some milsim brands caught word of what we were doing and because one of our parters already owned a sizeable manufacturing facility capable of producing a wide range of products, we began producing parts and complete assemblies for paintball markers and airsoft guns for a number of well known paintball and airsoft brands.  As we were producing parts for our clients, we realized that much of the internal mechanicals of these items were based on designs that were considered evolutionary some time ago, but were no longer state of the art by today's standards.  From this we created our own designs which are being patented and are introducing these new designs in our range of markers, milsim grenades and milsim landmines which are suitable for use for recreational players, tactical / law enforcement and military training.
Another one of our objectives was to diversify the range of products available or milsim use as well as bring down the price of manufacturing of items to help "grow" the sport as we found that there were many people who wanted to play, but could not afford to do so because the price of entry into the sport was too high for those wanting quality and durable products.

What makes S-Thunder different from other products on the market?
S-Thunder is one of the few companies that offers products for both paintball and airsoft players as products such as our grenades, landmines, CO2 accessories and coming grenade launchers are suitable for both groups to use.  Furthermore, S-Thunder is among the few companies that designs, engineers and produces its own line of products.   Due to the fact we handle most everything inhouse, we can save some money and we pass these savings to our customers.

Though some of our products physically "appear" similar others, they are quite different internally.  For example,
- our markers eject shells just like the real M4
- our grenades are able to fire paintballs, rubber pellets, pepperballs, smoke powder and bb's... and can cycle for 200 - 300 shots without changing O-rings and the only thing that needs to be changed is the gas core which takes 5 minutes to replace when needed
- our landmines are one of the few that are reusable and highly durable that functions with both colored water and / or smoke powders
- our CO2 accessories are able to hold charges for months at a time as S-Thunder formulated its own O-ring compound which can withstand the extreme temperature and pressure changes of CO2 gas

What is S-Thunder's biggest seller?
Currently the biggest seller for S-Thunder is its M203 style grenade with the water spraying landmine is a very close second place.  We feel that the style for the M203 grenade allows for easy loading and firing of a variety of projectiles (ie paintballs, pepper balls, bbs, smoke powder etc) allowing it to be used by both paintball and airsoft players.  Also, the fact that it can cycle a few hundred times before any servicing is required is an added bonus and convenience feature.  The water spraying landmine has also been a big hit for players as there is both the utility and fun factor.  Owing to the fact that there has not been a very durable and functional milsim landmine available in the market, our mine is easy to use and functions as advertised.  This particular landmine has been chosen for use for military training use by one of our distributors that also supplies army training units.


What are some challenges S-Thunder has encountered in 2010?
2010 has been a challenging year for many companies as the global downturn has affected most businesses worldwide.  Some critics may say that launching a new company during a recession is a bad move, but due to the fact our products are more affordable and durable than others, S-Thunder has been doing well since launching at the Shot Show in January.  In only 6 months since our launch, we now have distributors / retailers carrying our products in the USA, Canada, UK, Ireland, Germany, Spain, Switzerland, Austria, Chile, Japan, Hong Kong and we feel the market acceptance has been quite good, despite the bad economies in many countries.  Furthermore, we have gathered much attention from magazines, forums and internet bloggers who are reviewing and publishing print and video reviews of our products which helps give credible and unbiased reviews of our products to our current and potential customers.


What can we expect to see from S-Thunder in the near future?
S-Thunder just launched its line of foam ball grenades and we will soon launch the first in a series of pistol type grenade launchers which require less trigger force to activate grenades that are filled with high pressure gases such as CO2.  We found that many grenade launchers worked well for grenades filled with green gas / top gas, but when the grenades were filled with CO2, the trigger was very tight and required quite a bit of force to pull the trigger in order to activate CO2 powered grenades.  With this in mind, we created our own trigger and hammer mechanism which reduces the trigger force to an acceptable level which will therefore reduce a player's reaction time to fire a grenade.  We also have a number of other items in development that includes a trip wire type landmines / booby traps as well as a line of M4 style markers that are completely rustproof and can fire when under water. 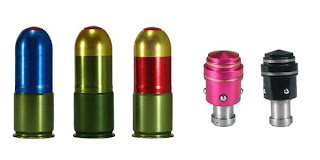 Here's what I took away from that:
I haven't done an interview in a while, I'll try do some more in the near future, any requests as to who I should pester?
Email Post
Labels: Airsoft Grenade Grenade Launcher Interview Milsim Paintball Review Video