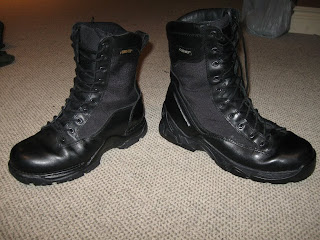 Recently, I was able to get my hands on a nearly-new pair of Danner Striker GTX boots in Size 9 for a teammate, as well as a new pair of Danner Telson GTX boots for myself. With both boots being highly suited to Milsim paintball, I thought I'd do a review on them for Grey Ops' Boot Week.

For the uninitiated, Danner is an American company based in Portland, Oregon. They've been making boots for all markets since 1932, and have a reputation for quality. Their products are durable, and Danner boots are usually on the "high end", usually retailing in the $150-$300 USD range. Most models of Danner boot can be "re-crafted" by the company ($45-$75), or even re-crafted & re-soled (for a mere $90). With this option, and the rest of the boot holding up well, it's not unusual to hear of people wearing the same pair of Danners for several years. 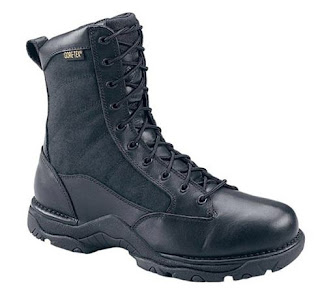 First, we'll take a brief look at the Danner Striker GTX. I haven't been able to wear these boots because of their size, and my smaller-footed teammate hasn't had a chance to wear them out in the field yet. So my review for these at the moment will have to be on the visual side only. 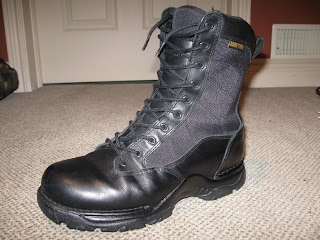 The Danner Striker GTX hasn't been made for about a year now, and it's now been replaced by the Striker II GTX. You can still find this model floating around in clearance sections of boot stores, and online. The main difference between the two models (aside from the cosmetic changes) is that a pair of the Striker II is lighter than a pair of the original Striker (50oz vs. 61oz).

One distinguishing characteristic of both the older and newer models is that they feature no metallic parts in their construction. All of the lace eyelets on the boot are reinforced with hard plastic rather than metal, and in place of a steel shank the Strikers use the "TERRA FORCE" platform for support. As these boots were made with police, security personnel, and EMS in mind, this absence of metal was a design spec included for people that need to work around metal detectors on a regular basis.

Like most Danner boots, the Striker GTX model includes a GORE-TEX lining, effectively making the boots waterproof. GORE-TEX is a Teflon-treated material that doesn't allow water to pass through in liquid form, but DOES allow it to pass through in gaseous form. As a result, the water in the sweat your feet produce is allowed to evaporate and leave the boot, keeping your feet dry, while outside water can't enter. As GORE-TEX is a brand name, it's only one of a number of similar fabrics that are on the market now that the patent by Gore & Associates has expired. SympaTex is another, while Dupont produces Dupont Active Layer, as examples (so be on the lookout for these in other brands of tactical footwear when you shop around). 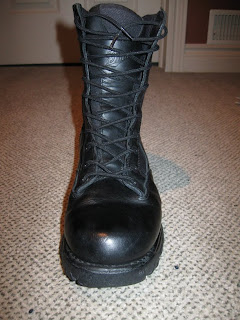 The outside of the boot is simple, with a conventional leather toe, which can be polished if your uniform standards require it. The upper sits atop a proprietary Danner outsole. The sole is made up of a mixture of circular and linear treads, allowing for a good grip on different surfaces. 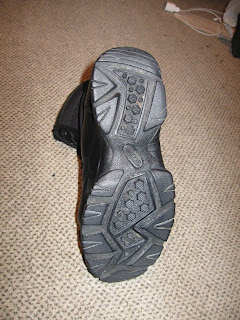 Proprietary Danner insoles are also included with the Striker GTX, which aren't too thick, but still provide for a very comfortable boot given the absence of metal underfoot. 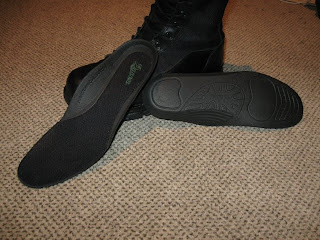 The rear of the boot features a moderately high heel cap etched with the Danner logo, with a strip of stiff leather running up the rear. This combination provides decent ankle support on rough terrain. 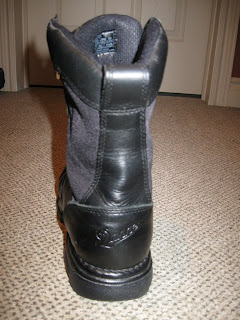 At the top rear of the boot is a leather hook for hanging your boots up to dry. I personally hate this feature on boots, as I find the backs of my pants get caught up on them. But it's nothing a good pair of scissors can't fix! 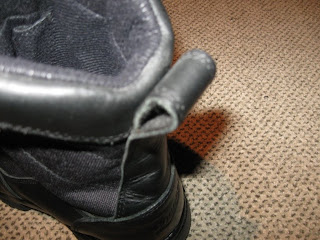 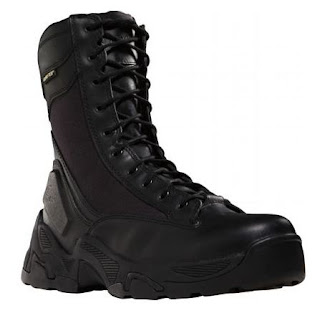 The Telson GTX is one of Danner's boots designed to provide the comfort of an athletic shoe. The design highly emphasizes ankle support, which is great for anyone going for long patrols through rough & rocky terrain, or for people who have to walk slowly or stand for long periods of time. As such, they're a favourite of riot police/crowd control officers, who generally have to stand in one spot and hold the line for hours on end.

Just like the Striker line, the Telson GTX does away with metal components. The lace eyelets are hard plastic, and Danner's proprietary EXO Platform provides for a durable chassis and lighter weight (57oz) while doing away with a steel shank. The Telson is made from extremely supple full-grain leather, as well as some 1000D Cordura Nylon to help reduce weight. Also like the Striker, the Telson GTX has a built-in GORE-TEX liner to keep your feet dry in wet conditions. 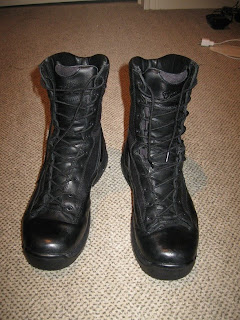 The toe on the Telson GTX is very short, allowing for more coverage by boot laces. This allows the user better control over the tightness of the boot along nearly its entire body, providing for a better fit. This better fit keeps the heel seated at the rear of the boot, allowing the superior ankle support features to work their magic. 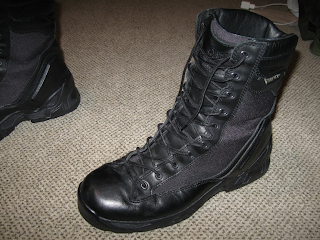 And what magical ankle support features they are! While most boots use a stiff leather cap at the rear to provide ankle support, with some providing a leather strip running up the rear for a little bit of additional strength, the Telson GTX goes the extra mile! Not only does the wearer's foot sit deep in the heel of the sole, but above the heel a stiff plastic extension lies on each side of the ankle. But that's not all! Above the plastic shield, a somewhat-rigid man-made material rises even further up the sides of the ankle, with a strip of it also running up to the top of the boot. Here's a photo of the rear of the boot, showing the intricate, multi-pronged approach to supporting the wearer's ankle: 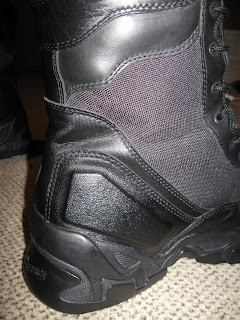 On the outside of the boot, the plastic shield bears a scorpion logo. This looks pretty hardcore, but I don't know what the significance is. 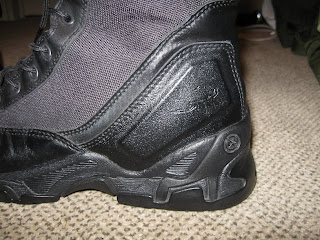 Here's another look at the heel of the boot, from the rear. Note the semi-rigid man-made material that runs up and down the center, along the Achilles tendon area: 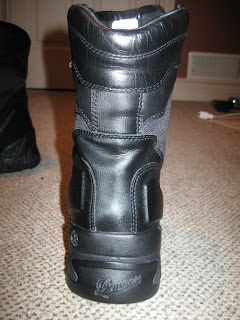 This placement of the man-made fabric allows unrestricted forwards and backwards movement of the wearer's ankle, allowing them to walk, run, or drive normally, while the hard plastic material on the sides makes it almost impossible to roll an ankle in these boots.

The sole of the Telson GTX features mostly lateral lugs to help with forward movement, with a perpendicular set of lugs running along the center to allow for sideways traction on various surfaces. 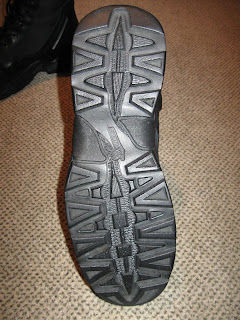 I wore the Telsons around a few times during the summer (matched with some Spenco PolySorb insoles), and found them to be very easy on the feet! They were extremely comfortable, fit better than most boots thanks to the extended lacing, and felt very light. However, I did find that my feet sweat a bit in them in the August heat! I can chalk this up to the GORE-TEX liner, because although GORE-TEX does allow the feet to "breathe", it still slows down the evaporation and ventilation process. There's no way around this, and it's the price of waterproofing a boot. Keep in mind though that this is just my experience, and I tend to be hot all the time anyway (I'm the type who's usually comfortable wearing a spring/fall jacket in the middle of winter). If you have feet that seem to always be hot and/or sweat, I'd recommend you only wear this boot in the cooler seasons, and pick up a hot weather-specific boot for summer. Given my current "boot lineup", my personal preference for wear would be Danner Telson GTX in the winter (due to the heat factor), and Rocky S2V Special Ops the rest of the year.


The Verdict on Danners

As lightweight, durable boots, with excellent traction and innovative design, both the Danner Striker GTX and Telson GTX fit the bill for top performance for duty use, and for Milsim paintball. Given the top-of-the-line features in these boots, their waterproof nature, and the proven track record of Danner's commitment to excellence, first-class warranty, and excellent customer service, I recommend these boots with no reservations.

While the price of Danners may seem high, you literally get what you pay for when you buy tactical boots. As the Danner boots WILL last a long time, you'll likely save money in the long run, as you'd have to replace several pairs of the cheaper boots in the time you could've owned one pair of Danner boots!
Email Post
Labels: Footwear Military Milsim Paintball