John Connor (Christian Bale) with an HK 416
Ever wonder what the pistol is you saw Jack Bauer wield in the last episode of 24, or what's the deal with the shotgun in No Country for Old Men? I know I've certainly found myself in similar situations, and given Grey Ops' target audience I wouldn't be surprised if many of you frequently do the same. 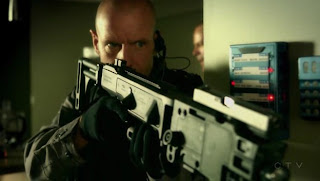 Cornershot with Glock from Flashpoint
To answer all your questions about who shot what and if it was accurately depicted in any kind of entertainment, (tv, television, videogames etc.) head on over to the IMFDB (IMDB with a firearm in the middle).

Here are some cool examples of stuff I've found out there:

Shotgun in this scene from Doomsday - the Neostead 2000

The little cell phone transformer in Transformers (live action)
actually has a miniature RPG-7 on its shoulder. This is a
great example of attention to detail on IMFDB.
Email Post
Labels: Guns Pistol Weapons