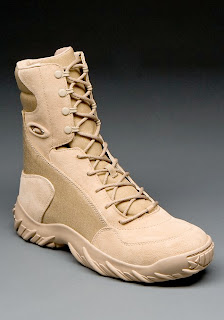 Back in June I reviewed the Oakley SI Assault Boots here on Grey Ops. In a nutshell, I remarked how the boots were extremely light and comfortable, but pricey and probably not that sturdy. Since then, I've had the opportunity to wear both the black leather and tan suede versions many times, and want to provide an update on them.

First off, I want to go over the good points about this footwear. These boots look great, are as light as a cross-training shoe, and require absolutely no break-in time. But their best feature is their EXTREME comfort. They literally feel like wearing SLIPPERS on the job and on the field, and I've jokingly referred to them several times as "a couples retreat for the feet".

That said, they do have their problems. A Grey Ops reader mentioned some in the comments section of the original review, and I'll quote from his comments to highlight some points.

"I find them VERY hot compared to my Wellco and Danner hot weather boots. These do not vent or disipate heat well at all."

I have no experience wearing hot weather boots, however I don't find the boots that warm at all. Certainly my feet have sweat worse in the Vipers, and definitely in a pair of Danner Telson GTX (probably due to the GORE-TEX lining).

"Its important to remember these are "assault boots" not an infantry combat boot (ICB). There is no steel shank in them so you will feel rough stone if it hits the sole in the right place".

This is true, however I don't feel that an ICB is needed for playing paintball. Unless you're constantly playing on gravel or very rocky ground (which wouldn't make for a very hot paintball field), a steel shank only adds needless weight in a game where you need to move fast and be light on your feet. Although I can see how an actual infantryman would need them if he had to carry 150 pounds of equipment on him...or maybe 150 pounds of bodyfat. 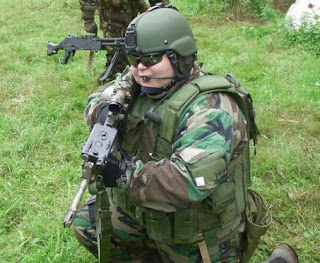 Under such circumstances, the immense weight would cave in the midsole in no time, and tactical boots like the Oakleys just wouldn't cut it. But in my opinion, for Milsim paintball, unless you're playing around the Grand Canyon or in the Rocky Mountains, an ICB is overkill.

"The treads are interesting looking, but useless in mud as they quickly clog and do not shed the mud as you move. The soles are glued not stitched, so waiting to see how they hold up."

I haven't had any issues in mud (yet), and the soles on mine seem to clean themselves pretty well. However, when the soles of the boots are wet, I slide every now and then on metal surfaces, and when getting in and out of the car (my right foot slides on the plastic flooring in the footwell). And I did notice squeaking on polished floors for a time at first, but as the surface of the soles has worn a bit, the squeaking has diminished.

"Apparently the US Issue Oakleys have none of these issues, and they off load the made in China versions to civs and the CF program. US made issued Oakleys are apparently very well done.I will use them for day hikers over duty/paintball boots."

I'll post the link to the Oakley U.S. Government Sales site to illustrate this. Note how they highlight "Manufactured in U.S.A." in bright red - is this another way to say "NOT cheap crap"?

"The stitching by the lace eyelets has let go near a flex point in the boot, it will need to be repaired, but Oakley only warranties the boots for 90 days and I'm just past that. Danner would issue me new boots and ship return to me for free if this was a Danner boot/issue."

I've also had this issue. At the stress point where the foot of the boot meets the ankle portion, two of the eyelets have been pulled out of position, and the leather's been torn. This has happened on both sides of both boots: 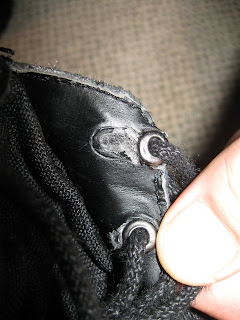 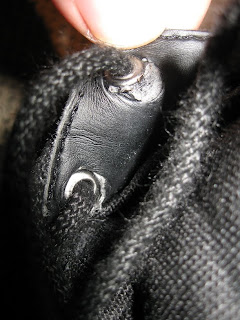 Interestingly enough, this has only happened on the black leather version, and not on the desert suede ones. With build quality like this, it's not surprising that Oakley is only standing behind this product for 90 days. I've worn these black boots for a grand total of 160 hours (about 15 shifts), which consisted mostly of driving. I can't imagine what they would look like had I been walking most of that time instead.

In summary, the Oakley SI Assault Boots are extremely light and comfortable, and I'll keep wearing mine until they completely fall apart around my feet. I love the way they feel on my feet, but unfortunately with all of their problems I can't recommend that anyone buy them at the $200 CDN Oakley is selling them for to civilians. Even at $80 through the Oakley Forces Program, I feel they're a bit overpriced - especially when the Vipers can be had for $60 CDN, and in my experience last a lot longer.
Email Post
Labels: Footwear Military Milsim Oakley Paintball