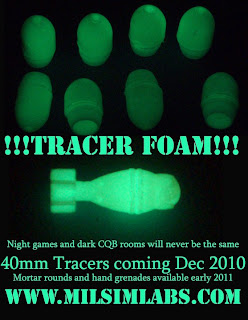 Milsim Labs (a paintball/airsoft ordnance company that I've talked about before) will soon be offering glow in the dark rounds for CQB/night play. I'm assuming you'll need to come up with either a container that bathes the rounds in light, or a modification for whatever launcher you're using to expose them to light before they're fired. While I think it's a great idea, I still don't think tanks in night play will catch on (too much risk of them running over a prone paintballer). That being said it would be perfect if you were trying to eliminate bunkers in the dark, or directing friendly fire/attention to a certain point (like a flare).
Email Post
Labels: Airsoft Grenade Grenade Launcher Milsim Paintball