No Money November had been going so smoothly...

Numerous paintball retailers are lowering their prices or offering great deals leading up the to the Christmas Holiday Non-Denominational Festival end of the year end of the Gregorian calendar (PC enough for you?) and many paintballers are feeling the economic love.

However, one of the more popular custom paintball gear manufacturers has, lamentably, gone batshit crazy. Observe: 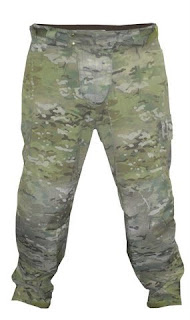 "Let's be honest...most people aren't interested in a pair of paintball pants that cost $275! However, to have a pair custom made, from a new material with amazing qualities, you can then hit the field with a part of your gear that is truly unique. "

Sure, and you can top the pants off with a pimpin' pair of gator shoes. Just be careful of your rhinestone-studded EGO 11, I hear those things chip off as fast as a agglet wipes.

"They do not bind and you will have full range of motion as though you were wearing nothing!"

If I wanted to wear nothing at all when playing paintball, I would. The resulting ticket would certainly come to less than the cost of the pants. And the potential loss of my boyz would be less emasculating than the feeling of dishing out a cool three Benjamins (or Bordens [but only the really really cool Canadians say that]) for a pair of pants.

Now, to be fair, it is made out of genuine Crye Multicam, and there is a much more affordable top for the reasonable $160 USD.

Please note that I don't have a problem with Special Ops whatsoever, I just think the price of the pants is hilarious. Flame shield on!
Email Post
Labels: controversy No Money November Paintball