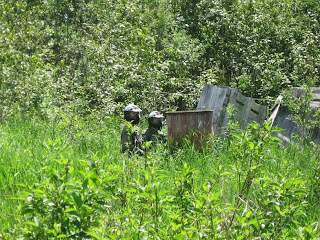 In the first post on the topic of communication, I explained the necessity of proper communication to maintain an effective team, and some obstacles faced in the heat of battle. In this installment, we'll look at how to overcome those obstacles.

First, to overcome the "heat of battle", yell loudly as you speak to your teammate, to snap him out of that tunnel hearing and keep him from tuning you out as background noise. Start your message with his name or call sign to get his attention, and to let him know the message is directed at him. If the message is directed to your whole team, yell out the team name first (or just "TEAM!") so that everyone perks their ears up. Not only does yelling increase your chances of being heard, it can serve a motivational purpose. Human beings are social animals, and most naturally seek and respond to leaders, especially under stress. By "speaking with your balls" (i.e. speaking loudly and confidently), you provide motivation and help keep the team focused.

Not only does your communication need to be loud during the heat of battle, it has to be clear, simple, and concise. "THEY'RE MOVING UP THE LEFT FLANK TO ATTACK, TWO OF THEM" is a lot harder to say or understand under pressure compared to "TWO LEFT FLANK!" Both messages say the same thing, while the shorter one is easier for stressed out and confused brains to hear and understand.

Another important concept in the art of battlefield communication is that of the human chain. If you can't yell that loudly for some reason, just yell the message down to the teammate next to you, who yells it down to the teammate next to him, and so on until everyone's in the loop. And keeping everyone in the loop is extremely important, especially when it comes to enemy positions. Picture the average paintball player who spots someone from the opposing team. He instantly gets pumped up and trades shots with him, engaging in a 1 vs. 1 firefight in his own little bubble while his other teammates take time to realize what's going on. If that player communicated the opponent's position to his 4 other team members as he engaged him, he'd turn it into a 5 vs. 1 fight, with the odds overwhelmingly in his favour. Also, with the team knowing where the bad guy is, they can get organized and suppress & flank him. So communicating this is important. 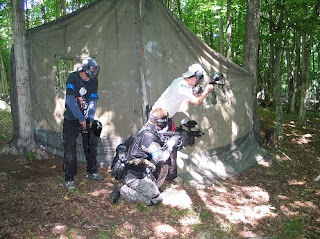 Now that I've gone over why speaking loudly, clearly, and communicating your intentions is important, you're probably thinking Wait a minute! You said yelling gives your position and intentions away. What gives? Obviously you have to tailor your communication to the situation. If you're waiting in ambush as another team walks into your kill zone, fer cryin' out loud shut your mouth! You'll have to communicate using hand signals, or whisper on a radio. 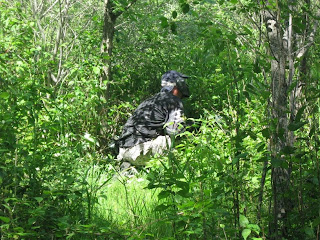 But in open combat, with all its mayhem and confusion, it's better to make sure the message gets through to your group by being loud and deliberate. Not only that, but a whole team communicating loudly, confidently, and aggressively to each other can have quite an intimidating effect on their opponents, letting them know that they're up against a well-organized group of badasses!

Now what about the issue of giving away your intentions to the opposing team? That's always a concern, but in a lot of cases it's unavoidable, and usually the benefits of communicating loudly and clearly to your allies outweigh the downside of clueing them in. Besides, in the middle of a fast-paced game, just because someone from the opposing team hears you yell "MOVE UP THE RIGHT FLANK!", doesn't mean they'll get organized in time to block your move. One way to hide your team's intentions though is to speak in code. Just like a football team calls out numbered plays to keep the other team in the dark, and cops use ten codes in front of crooks so as not to give their next move away, your team can put together a playbook where your plays/maneuvers are coded. As a simple example, your team can code the left of the field as Alpha, the middle as Bravo, and the right as Charlie. That way, instead of hollering "PUSH UP THE RIGHT SIDE!" and giving the other team the heads-up so that they can reinforce it, you could say "PUSH UP CHARLIE!", which would leave them guessing until your whole team is pouring through a gap on the right side!