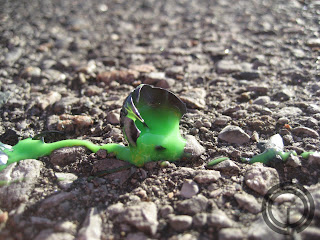 This isn't a particularly inexpensive paintball, I just like how the picture turned out.
It's been mentioned multiple times over No Money November that one of if not the biggest costs associated with paintball is the price of paintballs themselves. The shortest term solution to this is buying cheap paintballs for either BYOP or outlaw play.

My recommendation lies firmly in Visible Impact, which is available at most Walmart locations. It's produced by Procaps and is amazingly consistent for the price. Below is an example of the bright pink fill, which in my opinion is superior in both consistency and ability to be cleaned than many much more expensive options. 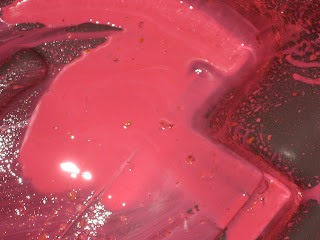 The shell has recently changed from a 2 colour red and yellow shell to a plain red shell, but from what I hear its still one of the best "dirt cheap" paintball option out there.

Mike has used Cryptic, another very cheap paint (purchased through Canadian tire), and I believe had a good experience with it.

What paint do you guys use when you're trying to save but still want a good performer?
Email Post
Labels: No Money November Paintball