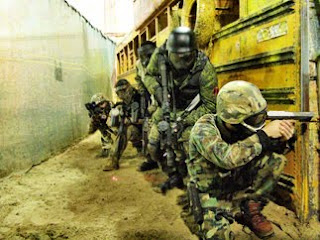 Most basic tactics at a team level, like suppression and flanking, rely on good communication between team members for success.

If you define a team as a group of like-minded people working together towards a common goal, the key here would be "working together". Working together effectively requires sharing and communicating ideas, knowledge, and intentions. Without this, there is no team! A group of 5 people on the same side who don't communicate with each other isn't really a team at all. Rather, you could say they're 5 individuals working alone against common opponents, and a waste of good team potential. 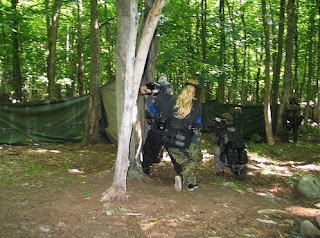 Communication really isn't that difficult, as we've been doing it on a daily basis for most of our lives. However, under battlefield conditions there are tactical considerations that make it necessary to modify your communication. In this post we'll take a look at these, and discuss how to properly communicate with your team in-game.

The first tactical consideration of note is that communication can give your position or plan away to your opponent. Yelling to your buddy 50 feet away at the top of your lungs "JOHN THERE'S TWO GUYS HEADING STRAIGHT FOR YOU AMBUSH THEM" doesn't help anyone except the bad guys. Not only did you give your position (and John's) away, but you've given the 2 opponents the heads up to hit the deck and take cover. Whispering can also be heard by your opponents if they're close enough, and it's hard to communicate effectively this way unless you're very close to your teammate (which can lead to the wrong message being received). So communication in battle is always a negative in some way (even using hand signals forces your teammates to look away from the opposing team's direction to look at you), but it's a necessary evil if you want your team to function well. 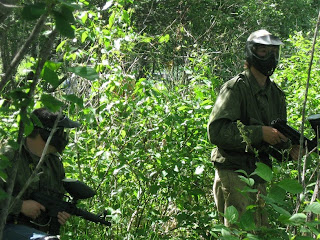 The second consideration is that paintball is simulated battle, and just like in real battle your teammates can be stressed out, make mistakes, freeze, and do other strange things. This affects communication in a big way. A team member can develop "tunnel hearing", where their ears tune towards the direction of the threat, but block out sounds around them. Your voice may break, or you may be at a loss for words, unable to "spit it out" to your buddy that he's about to get flanked. Also, just as in real battle there's a lot of noise, in the simulated battle of paintball the noise of markers firing, balls breaking on your cover, and paintball tanks rolling can make it hard to hear each other. So how do you tailor your "comms" to these considerations?

In the next post in this series, I'll offer some tips on communicating effectively with your team under the above conditions. Stay tuned!
Email Post
Labels: Milsim Paintball Tactics