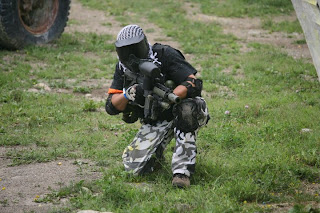 In the second post of this series, I explained the importance of suppressing your opponent, and how to accomplish it for best results. But suppression alone doesn't actually score points or win games, and to get results you'll need to exploit your opponent's suppressed state. This means that while he's hunkered down to avoid taking a paintball hit to the gogs, you'll need to move to a better firing position - preferably to one where he's exposed to your fire, and his cover is useless.

Usually this means moving around to his side, in what's commonly known as a flanking maneuver (flank is just a fancy word for side). Generally, any given bunker on your average paintball field provides great cover from fire in one direction, but poor to no cover from fire coming from any other directions. So by circling around your opponent's cover/bunker on his left or right flanks, you can usually take him out with a quick shot or two. 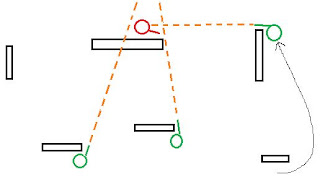 The best flanking maneuver is the one your opponent never sees coming, since by being sneaky and moving stealthily to his side, he doesn't have time to prevent your flanking attempt. Use bushes, ditches, and other bunkers to conceal your movement as you get into position, and to shield yourself as much as possible from fire as you move. Depending on how badly you want to win, you can even crawl on your belly in mud to stay out of sight. It would certainly give you a nice war story to tell afterwards!

But although the element of surprise gives you an advantage when flanking, it's not absolutely necessary. Often your opponent will clearly see you moving up on his flank, but will be powerless to do anything about it. During a properly-executed L-shaped flanking maneuver, moving to prevent your flanking move and deal with you exposes him to fire from your forward-facing teammates.

A basic, L-shaped flanking move is usually the best way to execute a flank attack In paintball. The L-shape guarantees that you avoid crossfire and don't hit your fellow teammates with "friendly fire", because your split forces are firing in perpendicular directions. 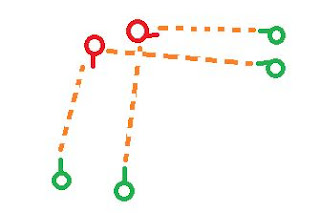 "Encirclement", also known as a "pincer maneuver", involves flanking an opponent simultaneously from both sides. "Envelopment" involves flanking "to the X-treme", meaning completely surrounding your opponent(s) on all sides. Because of the ranges and short distances involved in paintball however, the danger of crossfire while using these tactics is pretty high. Both maneuvers are better suited to large-scale strategic operations over wider distances, and would be best undertaken on a macro level by a General commanding hundreds of players at a big game.

Whichever flanking tactic you use, try to execute it as quicky as you can. While your opponent may be suppressed by you and your teammates at the moment, suppression is often only temporary. At any moment he may pop out and snapshoot, his reinforcements may come, or you may be ambushed or flanked yourself by one or more of his teammates! Since the tables can turn at any time, take advantage of the time window you have, and git 'er done quicky, with no hesitation!


How to prevent getting flanked

The best way to avoid being flanked yourself is to avoid being suppressed in the first place! Cowering behind a bunker and pissing your pants while paintballs whiz over your head is a bad place to be, so do whatever you can to avoid it. This is usually easier said than done, but many times it's better to retreat to a better position or regroup with your teammates, rather than try to win a firefight against a force with a lot more firepower than you.

Another way to avoid getting suppressed and flanked is to stay on the move. When you camp out and grow roots behind your cover the opposing team has an easy time locating, suppressing, and flanking you. If you stay fluid and relocate often you make life a lot harder for them.

If the worst should happen and you do find yourself suppressed, here are some steps to take. First off, take a knee or go prone. This makes you a smaller target, so if someone does make it to your flank they'll have a harder time seeing and hitting you. Next, cover your flank. By this, I mean aiming your marker at the side from which a flanking attack will most likely come. If you think a flanking attack is imminent, you can even lay down some suppressing fire of your own, shooting at your flank to "deny" it to your opponent and make it a deadly place for him. Lastly, don't forget the help your teammates can offer; yelling out "I'm pinned down!" lets them know you need assistance, and they can rush to your aid and help you take back the initiative.

Speaking of your team, if you want to avoid getting flanked at the team level, here are some tips to follow: First, spread out your team from one end of the tape to the other, covering the entire playing area. This prevents your opponent from finding a way to sneak around your forces, as your team is forming a "wall" blocking them. Of course, this can leave your team stretched pretty thin depending on the size of the field, so it leads in to my second tip: KEEP A RESERVE! Whether you're attacking or defending, always keep a couple players as a reserve force, ready to move to block against flanking attempts, and to fill in gaps in your lines caused by eliminations.

If you're defending, one other way to help prevent flanking attacks is to "layer" your defence. This way, if an opponent is trying to flank someone from your team, another teammate positioned further back will be in a position to shoot at the flanker. This tends to happen automatically in most paintball games anyway though, as more aggressive players push to the front, while others tend to hang further back.

In the next installment of the Tactics series, we'll take a look at an essential ingredient to making a flanking maneuver work: Team communications!

(My apologies for the crappy diagrams made in MS Paint!)
Email Post
Labels: Milsim Paintball Tactics