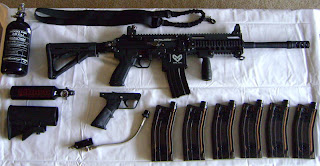 Paintball gear is generally pretty sturdy and built to last. Markers and tanks are built to take a pounding from high pressures, while Paintball apparel and Milsim accessories are usually pretty rugged and made to stand up to slides, dives, and lots of kneeling behind cover. With this in mind, members of the No Money Nation may be tempted to buy second-hand paintball gear to equip themselves. But before you lay down your hard-earned cash for used gear, there are a number of things to consider.

First, before jumping at an opportunity to buy something second-hand, it's important that the seller accurately describe the items he's selling, with no hidden secrets about it. The manufacturer's own ad copy already goes into detail about how great the product is, but an honest seller will tell you if there's a problem with the one he's selling, whether that problem is a scratch, a busted O-ring, or the need for a new ASA. If there's an issue that needs to be fixed, you can often subtract the cost of the replacement part PLUS extra for the hassle and tech work you'll have to do to bring the item up to working condition.

Next, it's important for price-haggling reasons to know WHY the seller is trying to offload his gear!

This seller is getting out of the game, and you can usually get the best deals from him. The Deserter is usually a noob who played paintball once or twice, bought a full set of gear, then just couldn't find the time to play after that. He thinks it was a bad decision and just wants to recoup some of his cash. Or it may be a hardcore player whose wife just gave birth to triplets and he needs quick cash, or who suffered an injury and decided that the adrenaline rush of Paintball just isn't worth another ACL reconstruction. And occasionally, someone with little or no interest in Paintball will get a marker for Christmas or his birthday, and he wants to sell it for some cash to buy the gift he REALLY wanted.

The Deserter's asking price is usually highly negotiable, and he wants to sell his stuff "yesterday" so he can get access to some quick cash and move on with his life.

This seller is looking to sell his existing marker and/or gear for top dollar, so he can upgrade to an even more expensive marker. This is the 98 owner who wants to pick up a TM7, or a TM7 owner who wants to rock a Bob Long M-TAC!

The Upgrader is very hard to bargain down, because they're trying to get as much as they can for their old gear to finance the sale of the new mega-gear. In most cases (because a lot of Paintball players are young, and young people are impulsive with their money), the seller has ALREADY bought the new gear, and is anxious to sell the old gear before the credit card bill comes in (or his Mom finds out).

The Gear Whore is the guy who bought a set of camo on an Airsoft site in size M, L, and XL because he couldn't figure out Chinese sizing - and now he's got 2 sets in the wong size to sell. Another example of the Gear Whore is the player with only 2 hands, who buys 12 markers - among them that AK-47 for the Soviet scenarios, the fully tricked-out M4 mag-fed gun for playing a US soldier, and of course that Engler Tommy Gun mod just for that D-Day game he goes to every 2 years. Somewhere between realizing that he's always using his A5 every game and the fact that his monthly credit card bills make him break out in a cold sweat, he decided it might be a good idea to thin out his gear stash.

This seller will usually be flexible on his asking price, but not by too much. Because he's got so much gear in rotation it's a good bet that whatever he's selling has only been used occasionally, and that it's in pretty good condition. A Gear Whore seller can also recognize a fellow Gear Whore buyer (after all it's not usually a beginner who's looking to buy an M249 SAW mod with a custom-made box mag), so he knows that the buyer would probably still pay a good price for a rare item. The Gear Whore may also be emotionally attached to the gear he's selling, and might value it in his mind at more than it's actually worth. Not to mention that if he posts his gear for sale on a forum full of other Gear Whores, there may be an all-out bidding war for it (depending on how exclusive it is).

The most fearsome of sellers, The Fence sells Paintball gear for a ridiculously low price. A price that's too good to be true, in fact. This leads to many possibilities, chief among them that he's setting you up for FRAUD (almost always the case when he wants payment by Western Union), or selling stolen merchandise at such a low price because he doesn't know anything about Paintball (other than that the store he stole it from needs better security), and has no idea of its real value. The worst case scenario is that you show up in person to buy the gear, and he's there with 4 of his friends to jack you of your $400 you were about to spend on that brand new MILSIG Paradigm still in the box. Needless to say, avoid doing business with The Fence at all costs. 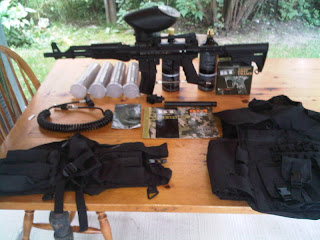 A great place to find Milsim-specific gear in good condition is on the Buy/Sell/Trade (BST) section of any Milsim Paintball forum. Generally the sellers there have good feedback and a reputation among the other members, and you can check their credentials with them. The downside, as mentioned previously, is that there are a lot of Gear Whores browsing those same forums, and as a result the prices on the equipment available can be pretty high.

eBay can also be a good place to buy used gear, although sometimes the used item you get might not be as advertised. For example, there may be fierce competition for a lightly-used TM7 for sale, but when you get it you find out the reason it was lightly-used in the first place is because the solenoid sticks, and it's a pain to get it to work. The seller can always claim "Well it was working fine when I sent it to you", and you're up s*** creek. 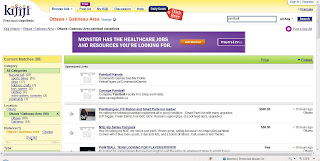 Online classified sites like Craigslist and Kijiji can often have some good deals, with many Deserters selling on there. The upside to these sites is that the sellers are usually local, so you can drive to meet up and see the stuff in person to make sure it's in good condition and works. You can also deal in cash on the spot, and you have no long wait to get your item(s) in the mail. The downside of course is that you may have to deal with kids, shady individuals, and no-shows who can waste your time.

Last but not least, fellow players at your local Paintball field may be looking to sell or trade gear. If you're looking for a specific item it may be useful to put the word out through the field owner, as he or she may know or come across someone who has that item to sell or trade. 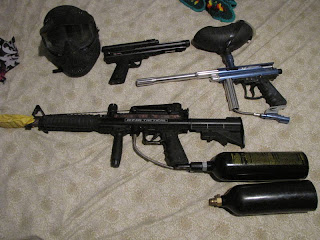 How Not to Get Burned

Once you've found your deal and you've got the money ready to spend, here's how to go about it safely and with no BS.

If you're buying from the Internet, USE PAYPAL. Pretty much everyone with an e-mail address and a bank account has a PayPal account these days, and can do business this way. PayPal usually covers you up to a certain amount (the last I heard it was $450 USD), and if you need to go over that amount you can separate the payment into 2 shots. With PayPal, if you pay and never receive your stuff, or receive junk, you have 45 days from the date of payment to file a dispute and try to get your money back. IMPORTANT: When you pay through PayPal, try to pay with your credit card rather than the bank account option. PayPal will try to get you to pay with your bank account so that they don't have to pay a percentage to your credit card company, but it's in your best interests to pay using the credit card option. That way if you file a PayPal dispute and PayPal dicks you around, you have the added recourse of calling your credit card company later and having the charges reversed at that level.

If the seller wants you to pay with any other form of payment than PayPal on an Internet sale, be it Western Union, some PayPal-like service that may or may not be legit, or cash in the mail, DON'T TAKE A CHANCE. No deal is ever good enough to get scammed!

If you're buying through the online classifieds and you're going to meet in person, here are some other tips to not get burned. First, meet the person in the daylight hours in a public place, with pedestrians around (like at a local paintball field). And unless you're buying an authentic-looking Milsim paintball gun that might be mistaken for a real gun, I would even recommend going to the visitors parking lot of a police station to make the transaction. If the person has any intentions to scam you at all, they will definitely not show up in that case, and you're better off. Don't just arrange everything through e-mail either; ALWAYS get a phone number for the person, and call them before you meet. Not only does the phone number give you a way for the police to ID them later if you get robbed or defrauded, but you can give them a ring if they're running late or don't show up. Lastly, if at all possible bring along one or more friends/witnesses with you. This will drastically reduce your chances of getting robbed or otherwise taken.

Buying used paintball gear can save you a lot of money, but it can also be a tricky proposition. With no warranty or ability to return an item, you may be taking a big risk on an item to save only a few bucks. Make sure the deal is worth it, and take the precautions I mentioned to have a hassle-free sale!
Email Post
Labels: Gear Milsim No Money November Paintball