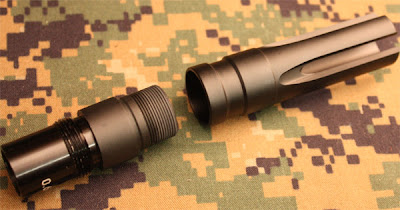 Here's the full release (found on Milsim Empire):
"New Micro Kits!The main release will be our new Micro Kits, these kits will include 5 bore sizes at 2.5” Long, 1 9" extension (11.5" total barrel length before tip) one barrel tip, Flasc Mini Barrel case, plus a Flasc Barrel cover. we are not 100% set yet on pricing but expected price will be $90 Canadian.

These kits will not have the same performance as our main line of barrel kits due to the length of the control bore, 9" is optimal for performance and our main line of barrel kits will always be our Best performing high end barrel kits. These new kits are designed more for the recreational player who wants full bore control and full customisation over their barrel but at a low price. While these will not have as high performance as our 9" control bore kits their performance will not be considered lacking and will be in line with what most kits on the market offer today. One thing to remember, many companies make barrel kits with 2.5" backs, but if you look at the backs you will find they are female threaded, this means that half (sometimes more) of the back is threading, and only half or less is actually control bore! as all other Flasc barrel kits our Micro Barrel kits have male threading on the front which means the control bore is complete! so our 2.5" "backs" have 2.5" control bores, whereas most 2.5" backs in paintball have a 1.25" or less control bore. So as always, our “backs” are not actually backs but full barrels and can be used as such! (Read below)Now with the release of our new Micro kits no matter what kind of MilSim barrel system you want, we can provide it!Bore sizes will be .678/.681/.684/.687/.690New Barrel Options!Along with the kits we are also simultaneously releasing our new micro bore barrels!These barrels will allow you the option of bore size (.678/.681/.684/.687/.690) and are fully compatible with all barrel tips and extensions (gen2 fake suppressors will be compatible when used with a insert when they are released, Gen1 fake Suppressors are unfortunately not currently compatible without additional barrel extensions)By itself when used with a Flasc barrel tip the total barrel length is between 4.5” and 5.5” or you can use 3” or 5” extensions (which allow full control over porting options) or our new 9” Extensions that will be released alongside the new Micro Barrels/Kits which will feature Gen2 Porting! (9” extension Shown in picture does not have Gen2 Porting but a generic porting pattern as it is an early prototype) So to recap, the new Micro barrels will offer an insane number of options for length and porting options when used with Flasc barrel extensions, full control over bore size and compatibility with Flasc Barrel tips. Never before has barrel customisation been this complete!"

Cool, eh? Dave from Flasc is consistently pushing the bar when it comes to innovation and creating what is the most varied and complete line of barrels/kits available to paintball players.

Here are some pictures: 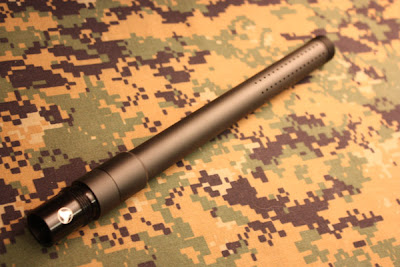