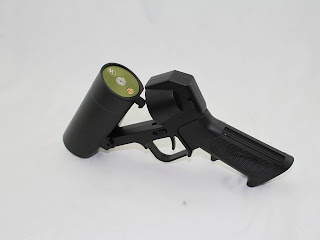 As previously reported on Grey Ops, S-Thunder has developed a new easy to use grenade launcher for 40mm airsoft/paintball grenades. Also, as I previously supposed, the grip is indeed interchangeable with AR-15 grips (although there may be some compatibility issues with the rear of the grenade launcher not accepting some grips that use the rear of the lower receiver of an AR-15 as a mounting point).

Here are some details provided by S-Thunder:


-  Pistol type grip grenade launcher
-  Easy to use and comfortable to hold
-  Manufacturer's Suggested Retail Price (MSRP) of US$69.99 (*) - making S-Thunder's grenade launcher one of the world's most affordable grenade launchers
- Body is made of a durable engineered composite material allowing the grenade launcher to be durable, light weight and easy to carry
- Trigger pull and hammer force are ideal for use with CO2 powered grenades as well as grenades charged with HPA/Top Gas/Green Gas/Red Gas/R134A etc.  Trigger is not excessively "tight" and the lighter trigger force will significantly "reduce" a player's reaction time when firing at stationary or moving targets
-  Accommodates all 40mm diameter paintball / airsoft grenade shells including S-Thunder's 40mm Shocker M203 style grenade shells and CO2 powered foam ball grenades
-  Breech loading allows for fast reloading
-  Safety and release switch is included in unit as an added safety precaution
-  Interchangeable pistol AR grip - users can customize the grenade launcher grip by changing the standard M4 / M16 style pistol grip with other AR grips available in the marketplace
Stay tuned for more S-Thunder news and reviews. Here's a quick video of the Grenade Launcher's operation (nothing launched however):