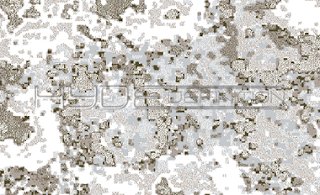 Lawrence, the marketing director of Hyde Definition (the creators of PenCott) has announced some interesting looking arctic camouflage through his personal blog, Strike-Hold. Here's the ad copy:

"Further showcasing the multi-environment versatility of the PenCott™ camouflage pattern, Hyde Definition announces the PenCott-Snowdrift™ colourway for snow-covered mountain, woodland and other broken- or mixed-terrain environments.
The traditional approach to “snow camouflage” has been to use a plain, solid white coloured over-garment; however, this does not take in to account the extent of shadows and other textures that actually exist in a snow-covered environment. Some historical patterns, such as the famous German “pine needles” pattern, have attempted to incorporate a disruptive element, and more recently the Finnish M/05 and USMC patterns used digital pattern geometry to improve disruption and concealment.
However, by adapting the naturalistic, complex, multi-scalar, hybrid, fractal geometry of PenCott, we believe we’ve developed a superior camouflage for a wider range of snow-covered terrain than any other pattern currently available.


About PenCott™  Multi-Environment Camouflage
First launched in late 2008, PenCott uses complex, hybrid, fractal geometry to more effectively enable the wearer to literally disappear into the textures and background “noise” of their operating environment.
The PenCott pattern works by dithering the different contrasting colours and tones into and against one another to give the illusion of several more colours, and to create a combination of blurred and contrasting edges and shapes. Complex patterns like this are harder for the human eye to process, and recognisable shapes such as human limbs, or the lines of pockets and seams, become more difficult to make out.
The PenCott pattern is multi-directional, multi-scalar and includes both a micro-pattern and a macro-pattern for close range concealment and long range disruption. PenCott also includes an innovative midi-pattern (middle range), and false edges at the high-difference boundaries of the dark patches, to further confuse the eye.
Through its radical combination of innovative features, PenCott provides versatile and cutting-edge camouflage and concealment across multiple types of terrain and environment – whether the wearer is four, forty or 400 metres away.
Note:  All images associated with this news release are computer simulations in order to illustrate the concepts described – not representations of current or final uniform designs.  The pattern colours shown are intended to be as true-to-life as possible, but may appear slightly different depending on your screen settings and when printed on different fabrics."

In my opinion, it looks okay, but nothing to write home about. I'll reserve any final judgement until I see some actual tests though, preferably here in Canada, which I consider the trial by fire for arctic camouflage. The ad copy states that there is something wrong with pure white snow camouflage, but when you're trekking through 2-4 feet of packed and powdery snow, it really is pure white.
Email Post
Labels: Camouflage Canada News Pencott