A Splat from the Past 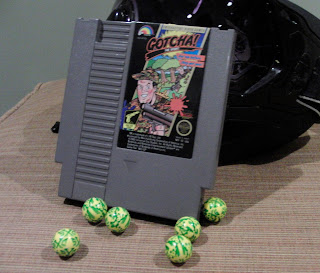 My good friend Chad was kind enough to lend me a part of Paintball's past, Gotcha! The Sport! I have yet to play it as neither I nor anyone else I know currently owns an NES, but come hell or high water I'll eventually play this game. Along with the game, the parent company Entertech also marketed "paintball markers" (I bracket that, because it's definitely a stretch), that are still floating around somewhere on eBay (example shown below). 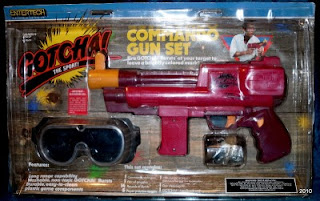 If you did manage to mark someone with the "Commando Gun" and document it, you'd be a paintball legend.
In my opinion, the marketing of painball video games will always fall flat. I'd rather be playing real paintball on the weekend, and if I am stuck inside in front of a console, I'd rather play a game where I'm shooting real people (as opposed to a game where you pretend to actually shoot people). I'm sure a psychologist wold have something to say about that.
Email Post
Labels: Paintball