Don't bother watching the full video if you have a short attention span, just read below for the highlights.
The Wolf's Den isn't known for their breaking news (which isn't a dig, it's just a consequence of Wolf's chosen medium), but Wolf's latest upload holds some interesting news/info for camouflage aficionados and paintballers alike.
Full Clip USA, a rather prolific gear manufacturer based out of the United States, will be releasing gear in both CADPAT and A-TACS in 2011. That includes lots of paintball specific gear, which is notoriously hard to find in the aforementioned camouflage patterns, and a very cool combat shirt as shown below in a screenshot from the Youtube vid: 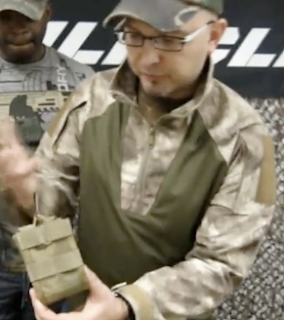 Nice, but the olive drab coloured wicking material makes no sense.
I've been looking for more affordably priced CADPAT gear, and hopefully Full Clip can deliver on that. It's too bad that it had to come from an American company though, you'd think there would be more homegrown Canadian fabricators of CADPAT gear (other than CPGear).
If it seems like I'm talking about A-TACS stuff too much/too often, let me know. I just love the stuff!
Email Post
Labels: A-TACS Cadpat Gear Milsim Paintball Video