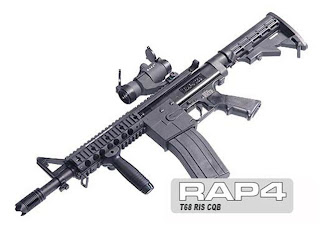 Judging from what I've been reading on blogs and forums in the Canadian Milsim Paintball community, there's a lot of confusion about importing RAP4 paintball products into Canada. I'd like to clear the record on what exactly can and can't be imported into the country, and look into the origin of some of the misconceptions.

Back in Summer 2009, I wanted to get my hands on a US Army Project Salvo. They weren't selling it in Canada yet at the time, so that left the option of ordering one from the United States. (I know it's not the prettiest of markers, but at the time I saw what some rail covers, a reflex sight, and another $10 for an Alpha Black curved mag could do for it). 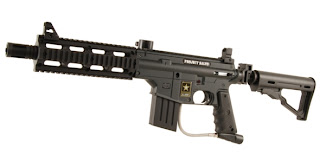 Of course with its mean-looking RIS rails, magazine, and stock, this was no shiny space gun. It bore more of a resemblance to those nasty EBRs (Evil Black Rifles) that goverments love to hate. Expecting problems with Customs, I e-mailed an old buddy at Canada Border Services Agency to see what the deal was, and after looking into it he replied "No restrictions on importing paintball guns, Mike! I checked and you're good to go". So I ordered the Salvo from a store in California, and about 10 days later the EBR came in the mail.

Knowing what I know now, I can see that my buddy was generalizing and oversimplifying the issue. There's a whole class of paintball guns that aren't allowed to be imported into Canada unless you have a special licence, but .68 caliber markers are indeed "good to go". (I'm not knocking his advice, as he was limited to the knowledge of the resource person he consulted with - and you can literally fill warehouses with all the importation laws and technicalities on the millions of goods that cross our borders).

Of course the main issue the Canadian government has with paintball markers is with ones that are considered "replica weapons". The degree to which a Paintball or Airsoft gun resembles a REAL Evil Black Rifle (or pistol) has a lot to do with whether it makes it past the border or not. In practice, this means that .43 caliber markers "replicate" firearms. Their diameter/caliber puts them close to the caliber of the real steel weapons. .43cal is 11mm, very similar in size to some real firearm calibers. An 11mm MP5 paintball lookalike like the RAP5 will have almost identical dimensions to a real 9mm MP5, and will be indistinguishable as a paintball gun (especially if the air source is hidden in the stock).

One of the saving graces of .68 caliber markers is their exaggerated size. As realistic & EBR as Milsim Paintball players think their own markers are, to a casual observer there are a lot of signs to pick up on that they're not real. Chief among these are the oversized barrel (with its large gaping hole at the end) and the large magazines on mag-fed versions. As a classic example, with its huge size and gaping muzzle, when placed next to a real pistol a Tiberius T8 has more in common with a hairdryer than a handgun.

The main factor hurting .43cal isn't just the looks, but the looks mixed in with some legal twists that force them to be classified as replicas. The RCMP Firearms Centre determines if a projectile launcher is a firearm through a basic test of firing it at the eye of a pig or a cow (not a live one of course). If the projectile penetrates the eye, then it's considered a weapon that can cause injury to humans, and that launcher's classified as a firearm. But the Firearms Centre's tests with .43cal markers have indicated that they can't cause injury, so they're not firearms. Since they're technically not firearms, but look like firearms, the CBSA has to class them as replica firearms. As replica firearms are illegal to import without a special licence, the average consumer trying to import a .43cal marker will have his shipment intercepted and denied entry into the country. But .68cal markers are just fine to import.

So what about the T68 seizure horror stories we hear on message boards? What about that account you heard about your friend's cousin's brother-in-law's team member having his RAP4 .68cal marker seized at the border? Well, there are reasons for this that I'll cover a little later. But for now, I offer this as proof that RAP4 Ugly Black Rifles are crossing the border just fine: 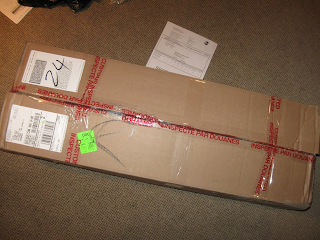 If you're not sure what you're loooking at, that's a generous amount of "CUSTOMS INSPECTED" packing tape sealing shut a shipment that was sent to me by RAP4 last month. Inside was not one... 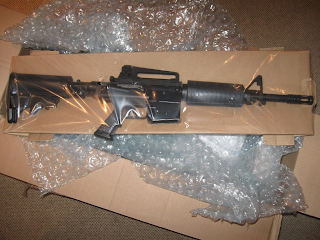 ...but TWO M4-style T68 markers, accompanied by magazines in boxes. 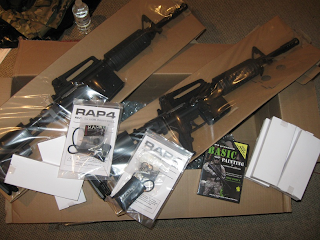 So with it clear now that .68 caliber markers ARE making it through with CBSA's approval, let's look at the main causes of RAP4's problems with Customs in the past. We'll also look at what RAP4 has done to improve its record.

Primarily, there were issues with declarations on Customs forms. When shipments of markers were coming through labeled as "Gifts" or "Model Kits" with ridiculously low declared values, shipments were getting seized for those false declarations. In the case of .68 caliber guns, the lies on the forms were the problem, not the markers. One unsettling example of misrepresented declarations was sending smoke grenades by air mail to Canada, labelled on the forms as "safe" and "toy". Given what could've happened if these pyrotechnic devices started burning in the cargo hold of an aircraft, they were serious violations. Another issue was with outright smuggling. RAP4 would try to get around Canada's replica import laws by doing things like mailing .43cal RAM pistols in pieces, in multiple shipments. This deliberate flouting of import rules also played a part in getting their shipments red flagged, and meant Customs went (in the words of Ving Rhames in Pulp Fiction) "Medieval" on packages from RAP4.

However, RAP4 seems to be cleaning up their act lately. The false declarations are a thing of the past, and markers are now being sent to Canada using UPS Worldwide Expedited shipping only. UPS has an inspection system separate from regular USPS mail, which makes for lower transit times in Customs. UPS Expedited service also includes free Customs brokerage, which saves Canadians the aggravating brokerage fees that UPS usually charges.

The end result was my markers arriving in Ottawa from RAP4 (in California) in 5 days. I paid the nice UPS lady at my door by credit card for federal and provincial taxes (about $40 CDN per marker package), and that was the end of the red tape!

Clearly, if you're Canadian and looking to order a .68cal RAP4 marker, you've got the green light. Just steer clear of the .43cal products for the time being!

Thanks to our reader Darsis for informing me on a lot of the current issues in this post. For more on current Paintball laws in Canada, check out an earlier post by Connor here.
Email Post
Labels: Canada Milsim Paintball RAP4 Store