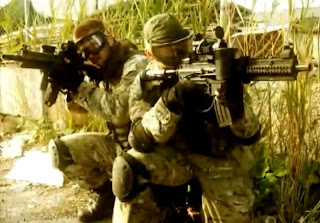 Smart teams at the small-unit level move and fight in formations to limit their exposure to enemy fire, divide up responsibilities among team members, and make it easier for the team leader to maneuver and manage his team. If your Milsim Paintball team doesn't make use of basic formations to move from place to place, then you're not only leaving yourselves vulnerable to attack, but you're missing out on valuable tactics that increase your chances of success on any mission. Whether you're just battling it out on a Sunday afternoon at a small local field, or moving deep into enemy territory on a mission at a Big Game, using proper formations can put you at a tremendous advantage!

Before continuing, I have to point out that the formations that will be discussed in this post are very basic. There are many different exotic formations out there to suit forces of different sizes, and adapted to different terrains and missions. But the ones shown here are usually sufficient for typical engagements at the ranges encountered in Paintball, at the small unit level (i.e. with a dozen team members or less on the team/squad).

Team formations are of course all about the TEAM. And in a team, everyone has a role. In formation, a member's role is to cover his Area Of Responsibility (AOR), also called "arcs of fire". If one member of the team had to scan all sides of the team in an environment of potential danger, while the others chatted, fiddled with their equipment, or stared at the ground, that would become very stressful very fast! By dividing the responsibility among all team members, it allows each team member a more manageable area to watch, and reduces the stress. Of course, this system only works if everyone is looking where they're supposed to be looking. If you're lazy and don't cover your AOR, and that just happens to be where the opposing force (OPFOR) pops up, then your entire squad could be wiped out - not just you. So DON'T LET YOUR BUDDIES DOWN!

So with AORs in mind, let's get down to the various basic formations out there.

The spear formation is mostly used for moving along walls in CQB (to stay in defilade/dead ground), or for going from point A to point B in the open as quickly as possible. In the open, forces using this formation are usually running at a near-sprint, because it's an awkward formation to get caught in a fight in. 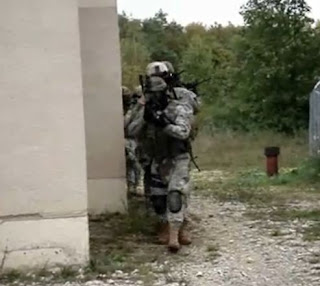 The faint brown lines in the diagram below illustrate the AORs of each team member as they move along a wall. The thick black arrow indicates the axis of advance (team direction). If the wall were on the opposite side, of course the AORs would simply be reversed. 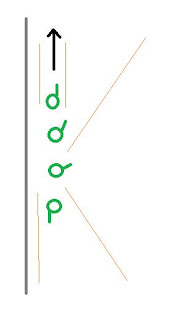 One drawback to the spear formation is that your team is open to an enfilade attack from the front. Enfilade is a position where a force is lined up against an attacker, literally like "ducks in a row". An opponent popping out directly ahead of your axis of advance could open up with a burst that could take out your entire squad. Imagine slicing the pie around a doorway and seeing this squad coming towards you; you could spray a burst at them and likely eliminate all 4 members in seconds: 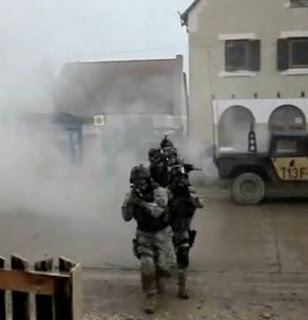 With this photo, I hope you get an idea of why it's important to move quickly when you're moving across the open in this formation! The downside of the spear is the possibility of frontal enfilade, but the upside is that it allows your squad to move somewhere fast as a unified/unfragmented group.

The following formations are used when your team is advancing into an unknown, with OPFOR contact likely. While in these formations, you want your squad members to watch their spacing, and keep as far apart as they can without compromising communications or losing sight of each other. This avoids situations where a grenade or burst of automatic fire takes out more than one player gaggling together. There's no hard and fast rule about how far apart you should be, but terrain and your surroundings will usually dictate how far you can be from each other.

The line formation brings all the firepower your squad has to offer to the bad guys. This "firing line" is the ideal formation for engaging opponents to the front. In fact, whatever formation you're in, to win a firefight subsequent to contact, you want your entire team moving to a line formation facing where the shooting is coming from. This also makes communication easier, because you're all side-by-side. 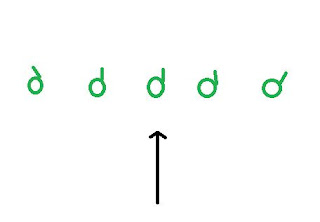 Like the spear formation, the line formation is vulnerable to enfilade, but directly from the sides. Because of this, your squad should only be advancing in line formation when your flanks/sides are composed of completely open ground, or when you have friendly forces fighting with you on both sides of your squad.

The AOR for all members in a line formation is straight ahead, along the axis of advance.

The wedge formation is a standard formation for advancing to possible contact. It's typically used in open terrain, with terrain features to the front and sides where OPFOR contact could come from. AORs are demonstrated in the following diagram, denoted by brown lines: 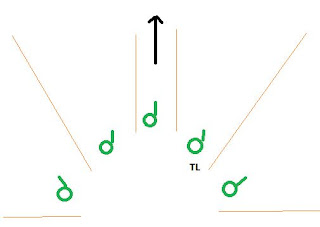 When contact is made, the team members on the outside edges of the wedge move forward to be in line with the lead member at the tip, creating a line formation/firing line. The squad leader/team leader (TL) should stay near the outside of the wedge on either side, to hold back and keep an eye on the squad. The spots at the very outside of the wedge sides are reserved for heavy gunners, who can bring converging fire on the OPFOR from opposite sides, or to use their firepower to protect the flanks when the team is in full-fledged battle.

The diamond formation provides 360-degree coverage on the move, and is usually used when moving through an area where a threat could come from any direction, such as a corridor, alleyway, or other CQB environment. 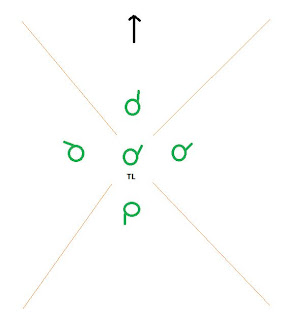 The TL moves in the middle of the formation, and has no specific AOR. The point man in front covers directly ahead, while the members on the sides cover the entire flank on their respective side. The squad member in the rear has the unenviable job of covering the rear, while keeping up with the team and "referencing" ahead to see where he's stepping. (There's a proper way to do this to make it less of a hassle, but I'll cover it in a future video post on tactical movement).

Alternatively, you could put the team leader in the front, to add an extra gun pointing ahead: 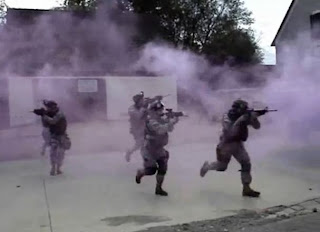 If a member of the squad gets taken out, the diamond formation can still function with 4 members. The TL steps out from the center, and squad members are shuffled so that he can assume the forward position.

On contact, the squad members on the sides move up to be in line with the member(s) at the front, once again forming that famous firing line. The rear member moves up and squeezes in where he can find the room to do so.

The T-formation is a diamond formation down to the bare bones. If the number of squad members is reduced to 3 (a likely scenario due to the danger of CQB), the squad can go on with 2 members in front, each covering half the front and a full side as their AOR. The rear member still covers the rear of the squad. This gives considerably more responsibility to each member, leaving the squad less covered and more vulnerable. Still, if a mission must go on in a 360-degree threat area, it's better than nothing! 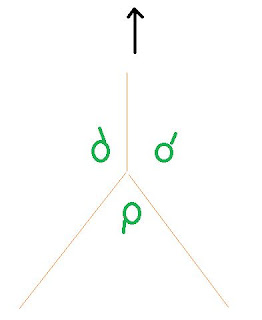 Many times while on the move, your team may be forced to stop for some reason other than contact. Whether it's for the team leader to check a map, or for a player to sort out a malfunction with their equipment, occasionally the squad will be forced to "go static". ANYTIME this happens, all the unoccupied members of the team need to assume positions to cover 360 degrees around your position. When a force is stationary, it's at its most vulnerable.

In the diagram below, a scout has come back to advise the Team Leader what he saw ahead, and show him on the map. The remaining squad members have taken up defensive positions around them, covering all sides: 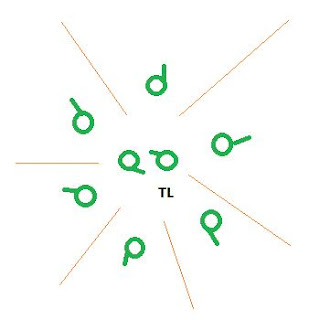 In the next post in this series, I'll discuss squad/team movement, and how you should navigate various forms of terrain and danger areas. Stay tuned!
Email Post
Labels: Airsoft Milsim Paintball Tactics