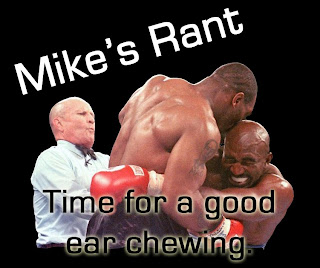 This month's rant is less of a rant, and more of a BEEF. Long a bastion of Hip Hop and WWE wrestling, I'm bringing the beef to the world of Paintball - although this beef isn't really directed at any one person, but at a blog post.

Regular Grey Ops readers got to follow a recent series on the Top Ten Milsim Markers, a collaborative effort between Grey Ops and Hitman Paintball Reviews. Somehow, Empire/BT Paintball's TM Series markers snatched the #1 spot. This came as a surprise to many, who felt the Tippmann A-5 should've come out as the top dog, given its longevity and influence in Milsim Paintball.

I wasn't sure how Connor and Stan came to a consensus with the TM Series in the lead, so I went to ask Connor himself. He explained that they sent all their data on the markers to the team at Deadliest Warrior, had the resident computer geek throw it all in the computer, and ran 500 simulations on a program that had battle-hardened Spetznatz, IDF Commandos, and US Navy SEALs shooting it out with the guns in a three-way team deathmatch. Each time near the end of the battle, some lone guy in fugly Battle Tested Pro Pants would jump in the fight with a TM-15, and hose everybody who was still standing with 20bps. Nobody could figure out how this was happening, until someone realized that there was an error in the data. Apparently the info on the MILSIG K-Series wasn't available when the simulation was run (even though the MILSIG web store said it was), and it skewed the results. Unfortunately, by the time the bug was discovered and worked out, the TM Series had already been posted as the #1 marker. 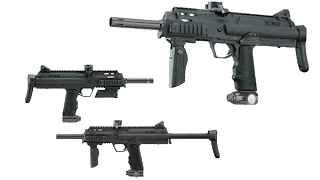 But I digress. As I wasn't privy to the decision-making of the series, I don't fully know how the rankings were reached. And while I have to agree that the TM markers deserve their place on the list (for the reasons the #1 post mentioned), I have a beef with them taking first place. My experience is that the TM7s are buggy guns that were rushed to market with lots of problems for the end consumers to troubleshoot. The TM15 isn't as bad, but still has an issue I'll discuss later.

Early TM7 models were released with flimsy selector switches, fragile power buttons, and solenoids that tended to stick for no apparent reason. Although later releases fixed the first two issues, the solenoids were still posing a problem for a lot of owners. Anyone with the sticky solenoid problem could send it back to BT under warranty, and it would be replaced with...an identical solenoid. This sometimes solved the problem, but not always. Undaunted by any of the solenoid issues, BT released the TM15 with the same faulty part, and some TM15 users began to complain as well.

(As a quick aside, a lot of Milsim players were unhappy with the odd straight grip of the TM15, which isn't true to the 45-degree grip on real steel M4/M16/HK416 assault rifles. This aesthetic difference is a real sore spot with some).

Then BT released a new product called the "Solenoid 2.0 Upgrade", which was essentially an Invert Mini 'noid made to be mounted to a TM series marker. Unfortunately, TM marker owners who wanted to "upgrade" their marker (i.e. get it to work properly) had to shell out anywhere from $80-$100 CDN for it. 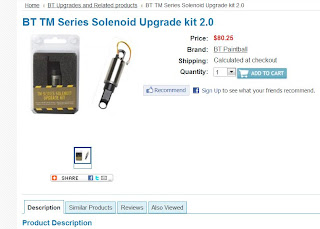 It's my opinion, and I'm probably not alone in this, that releasing products with a faulty design, then selling an upgrade to make them work properly, was an underhanded move on BT's part. To put it in perspective, imagine Toyota forcing Toyota owners to pay to get their own cars fixed during the big recall of 2010. Ethical companies realize the end customer is their bread & butter, and own up to their mistakes. BT made their customers pay for theirs instead, until late 2010 when they started giving them out to their customers under warranty for free. I presume they realized that their earlier plan of making the end user shell out cash wasn't winning them any repeat customers.

This alone would be enough to keep it from the #1 spot for most, but there are other reasons. The TM7 is a bit of a nightmare to take apart and clean, thanks to some fragile wiring. If you pop the clamshells apart in the wrong way, or with a little too much force, you risk ripping the wires to the battery terminals clean off. Should this happen, the marker would be out of commission until you could solder it (or find someone who could). Yes, this did happen to me. 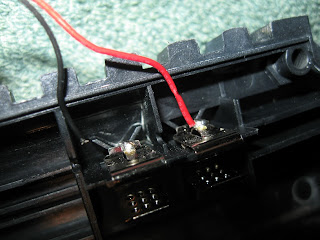 The new solenoid made this even worse. The wires from the 'noid sprout out the front, and have to go backwards along its length to reach the connectors to the battery terminal. This strains the wires, and puts a lot of tension on the battery connectors. The wires are just too short to do the job properly, which leads me to believe that the company just took an off-the-shelf part with short wires and put it on a mounting that would fit the TM series. 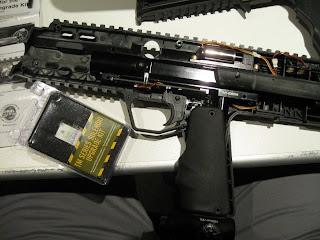 Here it is in comparison with the original solenoid, above it. The wires come out of the proper end on the original design: 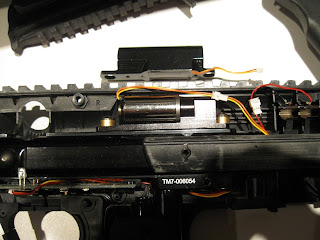 Another issue that hurt the TM series markers during their early years was the lack of a Rip Clip loader suited for them. BT's TM markers featured Picatinny rails topside, but mounting a hopper on the markers caused problems for affixing sights. BT mentioned that they would put out a side-mounted Rip Clip to solve the problem, and that took forever. When they finally came out, there were big supply problems. Users also found that after all that waiting, the Rip Clip hadn't even been designed and molded to fit the TM series bodies. Instead, the original Rip Clip was in the box (with a few small changes to the electronics), with an adaptor that made the loader stick out another 3/4". Not only did this make the user an easier target when popping out to the right from cover, but on the small TM7 the loader's weight and extended placement caused it to tilt over drastically to the right side. The Rip Clip makes the TM7 very unbalanced.

Unfortunately, now that I've put so much money, upgrades, and trouble into the TM7, and got it working properly, I don't want to get rid of it. But would I recommend it to someone else? No. And it certainly wouldn't be #1 on any lists for me. In fact, because of their business practices with the TM series, I'm leary about dealing with BT at all at this point.

And while I'm on Empire/BT's case, I might as well announce (and Connor will disagree with me on this) that the Empire Trracer has received Mike's Fugly Marker of the Year Award 2010. It was a close call with the runners-up Tippmann Gryphon and Inspire BFG, but the Tracer just had that WTF Factor that pushed it to the top. 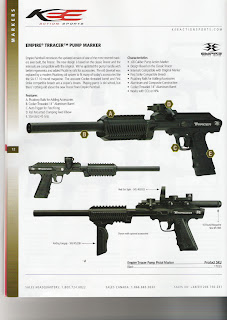 Besides the aesthetics, another reason that made me loathe this monstrosity (aside from the extra R in its name) is a safety issue with its velocity adjustment. Despite people admiring this "Milsim" pump (are Picatinny rails all it takes for something to be Milsim these days?), in this day and age of marker design you shouldn't need to shove a 2 foot-long allen key down the barrel of a pressurized gun in order to adjust velocity between test shots. One can only imagine the lawsuit that'll result when a Trrracer shoots one of those allen keys through some poor kid's head, Phineas Gage-style.

********
The preceeding opinions are mine alone, and don’t necessarily represent the views of Connor or any other writer on the Grey Ops team. Please direct all wrath, angry comments, law suits, and profanity towards myself (Mike), and spare all innocent parties.
Email Post
Labels: BT controversy Hitman Paintball Milsim Paintball Pump Tippmann