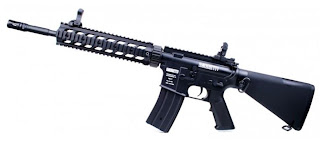 A reliable source, who wishes to remain anonymous at this time, just broke this news about Canadian Airsoft laws to the Grey Ops team:

"Airsoft in Canada may soon get a boost with the recent pick up of "Canada Legal" guns coming into the country. Seems that full metal AEG's and GBB's are being shipped with paperwork claiming they fire bewteen 430 and 500 fps. This sits them into the legal grey area occupied by .68 paintball markers and would pass inspection by the CBSA, full metal bodies and all. Now, what the paperwork says and what they'll actually test at is to be seen, as some seem to still have hang tags on them saying they fire at 380 fps, and would therefore be illegal replicas.

"Secondly, not sure how most airsoft players out there would want to be hit by bb's at 480 fps, so internal mods may have to be done once they're acquired in order to make them safe to play with, but this may put an end to "clearsoft" in Canada and give us some decent made, decent looking airsoft guns at reasonable prices.

"In theory, this practice could also be used for .43 paintball markers such as RAP pistols, but the marker would have to have a normal operating range of 430 to 500 fps, which is way beyond what's safe in paintball today. Several rumors are floating around at the federal level that there will be "Canada legal" .43 markers, but nothing seems to be on paper yet, so don't get your hopes up."

Will we Canadians soon be able to buy Airsoft guns and .43cal markers with the same ease as buying a Tippmann 98? Will we be able to import Airsoft guns from Asia legally? This is definitely some interesting news. Stay tuned to Grey Ops for more news as it develops!
Email Post
Labels: Airsoft Canada Milsim News