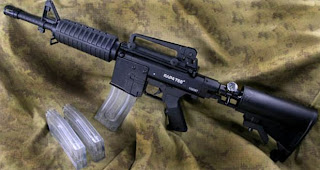 In a recent post I took a look at the issue of importing RAP4 .68 caliber markers into Canada, and cleared up some misconceptions about the process.

In case you were wondering, the markers I received and showed off in that post were Post Operation EndWar Packages. RAP4 pulled a lot of stock to put together rental packages for players at their mag-fed-only Operation EndWar game in October 2010, which left them with a lot of lightly-used equipment. The refurbished packages, containing a marker, 13ci HPA tank stock, and 3 magazines, are now selling for only $299 USD. 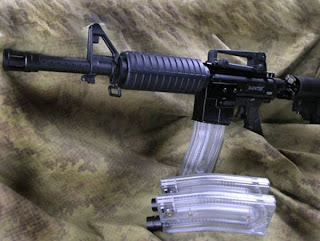 The nice low price point of these marker packages makes them ideal for those who want to try out the magazine-fed style of paintball play, without breaking the bank by spending $1000 on a similar marker and mags from [a certain other company]. If you find you like going mag-fed (it's not for everyone), THEN you can shell out the big bucks later for a full setup from [a certain other company]. These kits may also be an attractive low-cost option for those who don't want to gut their current markers for RAP4's upcoming conversion kits, with a God-knows-when release date (release delays are typical in the Paintball industry).

RAP4 used to have a bad rep for their products, earning them the nickname "CRAP4" among many in the Milsim community. Users complained about leaks out of the box and other issues. However the company seems to be turning over a new leaf as of late, and trying to make things right. As recent examples, they delayed their box mag release because of an issue (rather than release a faulty product and make quick $$$), and have started selling their T68 marker line with a 5-year warranty - basically unheard of in this business. In any case, the markers in this particular package were used for a weekend at EndWar and were fully cleaned & refurbished afterwards, so any leaks or other issues found during this 2-day "testing" will have been taken care of.

It seems as though feedback on this kit has been good so far. I'll be posting my impressions with them in the coming days, now that I've had a few weeks to tinker with them and test them out. In the meantime, if you want to jump the gun on the review, you can pick them up at the RAP4 online store if you're Canadian, and also here if you're in the U.S. Keep in mind that if you're shopping at RAP4, the coupon code "TTPL" at checkout should get you another 10% off.

Oh and in case you're not too crazy about the clear mags, it's nothing a little Krylon Camouflage spray paint or some McNett Camoform cloth tape can't fix.
Email Post
Labels: Gear Milsim Paintball RAP4 Store