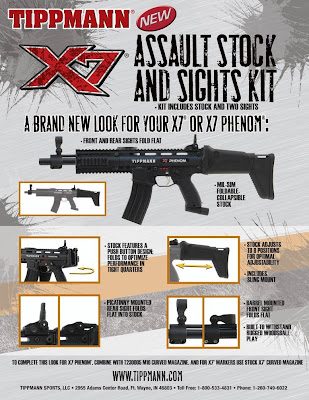 Well it looks like Mr. Hallak of Scenario Arms might be up shit creek without a paddle (not that things haven't seemed like that recently anyways).
Tippmann has (finally) listened to the cries of their X7 fanboys and has announced that they'll be releasing a SCAR kit for the X7/X7 Phenom platform. Those of you that have an X7 conversion kit coming in from RAP4 should think about making an awesome mag-fed SCAR with these new accessories. If you don't know what a SCAR is, you're probably one of the people that end up on this site searching for crush fetishes or something.

Now here's something to ponder: Tippmann just wrapped up a big fiasco involving them and a lawsuit from HK, regarding copyright infringement. Now they're marketing something that's virtually identical to an FN Herstal product. Have they not learned from their mistake, or is there some clever licensing going on?
Email Post
Labels: Milsim News Paintball Tippmann