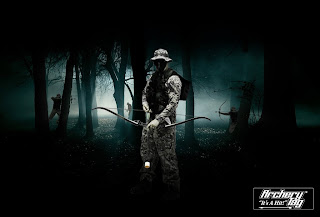 In the grim darkness of the future, there is only archery.
Jumping on the shooting people for fun bandwagon is newcomer "Archery Tag". From what I've seen, it's being marketed as a casual game to be played either in the woods or on a speedball field. While definitely not something that airsoft or paintball players would transfer entirely over to, it could probably serve as a great pick-up game for a cottage where other options might not be as easily or safely available.

I'm assuming the game is limited to recurve bows, as a 80 lb. compound bow would probably knock somebody out with the right shot. Conceivably though, you could have different classes of games, with people being allowed to use compound bow only if they fired them at a 45 degree angle or higher, making for crazily long engagement distances.

Now I want somebody to host a wild-west-sim with these and paintball/airsoft revolvers/lever action rifles, that would be cool. Conceivably, these would have a lot of popularity for medieval recreationists as well.
Email Post
Labels: Hunting Scenario Video